Over 8 years ago, we over at On Landscape performed a mammoth “Big Camera Comparison.” We compared medium format and large format film against various digital cameras including the then cutting edge Phase One IQ280, an 80MP CCD sensor which we used on a Linhof Techno, an Alpa, and a Cambo technical camera (we also tested a D800 and a 5D Mark II).

The general summary was that the 80MP and 4×5 were quite close in many ways (more fine detail in 4×5, more punchy contrast in the 80MP — prints looked similar). But one of the big reasons we made the test was a reaction to an article by Luminous Landscape declaring that the IQ180 cameras now beat 8×10 film.

To cut a long, laborious and geeky story short, the answer was “no they don’t”. The results from 8×10 film blew away the 80MP Phase One sensor and it’s fabulous Rodenstock lenses completely. Here’s our previous side-by-side comparison with a quick photograph of the test scene first: 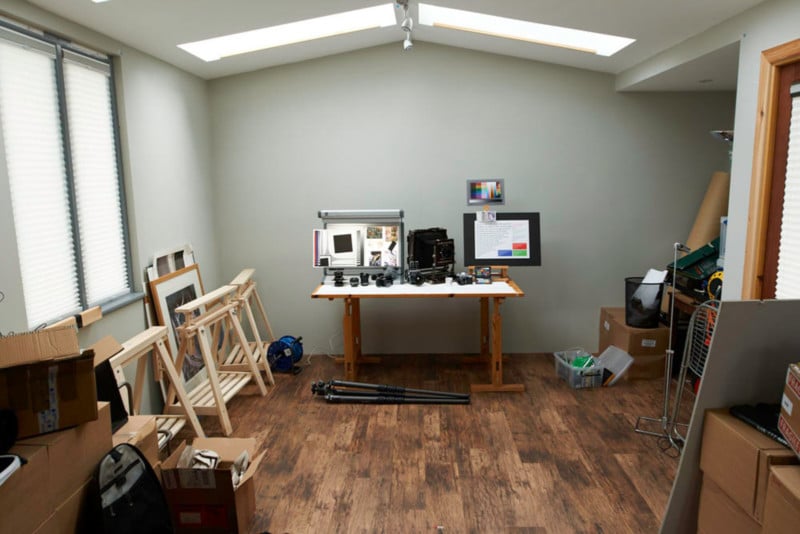 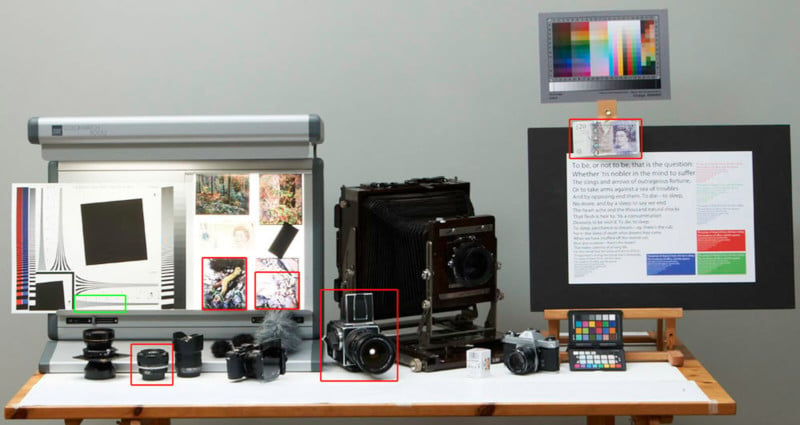 Our final analysis had the 8×10 film coming in at about 300-600 megapixels. However, that didn’t tell the whole story as 4×5 film came in at a potential 200+ megapixels and yet the IQ280 files printed just as good. The 8×10 photographs in the field looked better than the IQ280 definitely but not by massive amounts.

Since then, there have been lots of improvements in camera sensors and obviously very little movement in film technology. Although to be fair to film, its use is now growing and there have been some ‘saves’ and ‘remakes’ (e.g. Kodak E100G).

Landscape photographer and On Landscape co-founder Joe Cornish recently upgraded the new IQ4 150MP sensor and TeamWork approached On Landscape about going out and testing the camera in various ways. We were interested in how it compared with 8×10 film being as things were getting close in our previous print comparison.

So, photographer Al Simmons and I took a walk around Glencoe for an afternoon accompanied by photographer James Fortune, who just happened to have a Nikon D850 which we were able to include in the test.

To get the right comparison, I was using a Toyo 810MII camera with a Schneider 110mm Super Symmar XL lens to try to match the field of view of the IQ4 150MP sensor on the Phase XT camera and the 23mm Rodenstock Digaron HR lens. These are very similar angles of view as you’ll see in the test images.

We were not trying to be as technical as our last tests as these were more about ‘in the field’ use and the numbers from the previous test probably tell us the theoretical results. Hence our first photograph was taken at Glencoe Lochan. It was a bit of a mess as I’d forgotten they were draining it to repair the dam — ah well, this is a resolution test so no problem.

Here’s the view as taken with the IQ4 150MP followed by the photograph from the 8×10 camera. The 8×10 was used with a graduated filter but obviously the holder vignetted badly. We also took a photograph on color negative film which showed no vignetting.

The following is a zoomed view of the point of focus for both cameras which is shown on the Phase camera by a red outline:

Our following test took us to the top of Glencoe from a spot called “The Study”. Here’s the overall view from the Phase and 8×10 cameras.

The 8×10 shows the vignetting from the graduated filter again and the two pictures have different conditions. If you look at the small red outline near the middle of the picture, this is where we’ll be doing the comparison. Here is our first comparison at zoom level one

To get a better idea if you’re on a smaller screen, we zoomed in on the area around the road sign. We’ve also included James Fortune’s photograph from his Nikon D850 with the 14-24mm lens.

You can see that although the Nikon isn’t pixel perfect, the IQ is about as good as you’ll get. (The 14-24mm is a good lens but nowhere near a Rodenstock HR Digaron).

Our final comparison pictures were taken below the house in the last photograph.

You can see here that the 8×10 photograph shows no vignetting as this was taken on Fuji Pro160S film and needed no filters.

The red area is quite small on this comparison but hopefully, you can still see it. Here are the contents of the area starting with the Phase version.

And again, here is a version zoomed in a little further to show fine detail differences.

And a final high-resolution comparison — here’s the writing on the road sign from Glencoe: 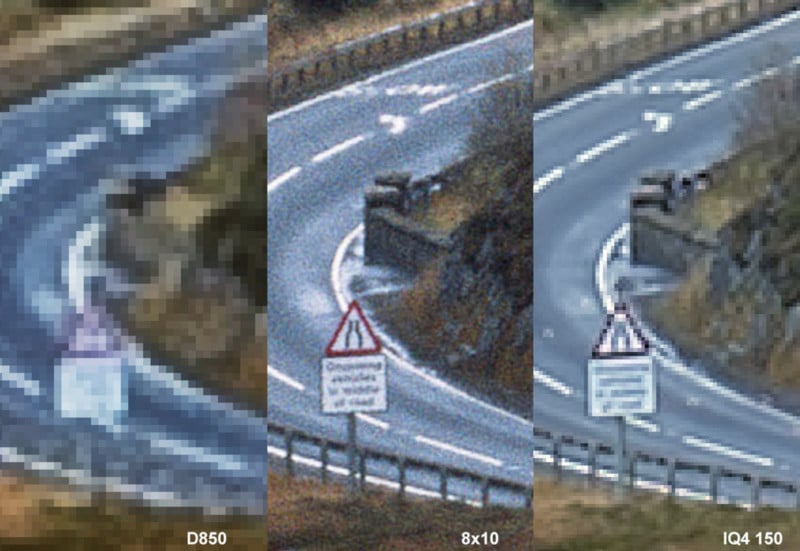 Well, What Does It All Mean?

We’ve covered a huge amount of this territory in our previous comparison article, but in summary, 8×10 trounces the Phase One camera for absolute detail but unless you’re printing over three meters wide then it’s not going to be visible.

What is more, the Phase One system has become quite ‘friendly’ now, with its fast frame rate live view, focus peaking, huge dynamic range, very little color distortion, and electronic shutter, there are very few reasons why any sane person would want to use an 8×10 instead. The Phase cameras have reached a functionality and usability point that means using medium format digital is no longer a fight with the equipment. There’s a falling away of MF digital hurdles as each new camera gets released.

Then again, photography is an art, not a science, and many people make their choices of medium based on how the process works for them creatively. There’s also the small matter of expense to take into account as well.

These tests don’t really mean much beyond a nice ‘experiment’. Getting a sharp result from 8×10 is no mean feat, what with sagging film, camera movement, trying to use smaller apertures to keep sharpness, fighting with a huge camera, carrying a heavy backpack, etc. It really is a challenge.

Personally, I love using the 8×10 though. It feels like you’re really ‘working’ something and the satisfaction of a good result can be directly proportional to how hard it was to make it.

For me though, the real benefits of 4×5, 5×7, and 8×10 systems are the ease with which camera movements can be made, the beauty of lenses that render beautifully to the corners, the accessibility of lenses that have ‘character’ that you just can’t use on smaller formats, the color reproduction of Velvia 50 (still hard to match, even with ninja photoshop skills), the relinquishment of the continuous upgrade cycle and the pleasure of really knowing your equipment.

The conclusion: use whatever makes you happy! If that’s pinhole or 8×10 it doesn’t matter a damn. (However, an 8×10 frame on a light table and a good loupe is a rare joy indeed).

About the author: Tim Parkin is the editor of a dedicated landscape photography magazine On Landscape and also the CEO of a drum scanning business. The opinions expressed in this article are solely those of the author. While not in front of a computer writing and post processing, Parkin can be found in the Yorkshire Moors with his 4×5 or 10×8 view camera. This article was also published here.

Previous Photokina 2020 Has Been Cancelled Due to Coronavirus, Will Return in May 2022
Next An Intro to Intentional Camera Movement (ICM) Photography