Behind the Scenes: Shooting Creative Light Painting Photos for Halloween

It’s Halloween, and I couldn’t be happier. As a light-painter, this might be one of my favorite times of year. Does every photographer have a ton of creative ideas around this holiday or is it just me?

The best thing about light-painting is that people don’t need extra costumes or accessories when shooting. All you need is a light source and a creative idea. This year, I wanted to find some part of daily life that many of us are already scared of.

That’s how I landed on the idea of light-painting some ghouls into an ordinary office setting (actually the office where one of my friends works). I’m sure many of you have had a similar experience before: that creepy feeling of being watched while you work alone late at night. That’s what we wanted to capture. 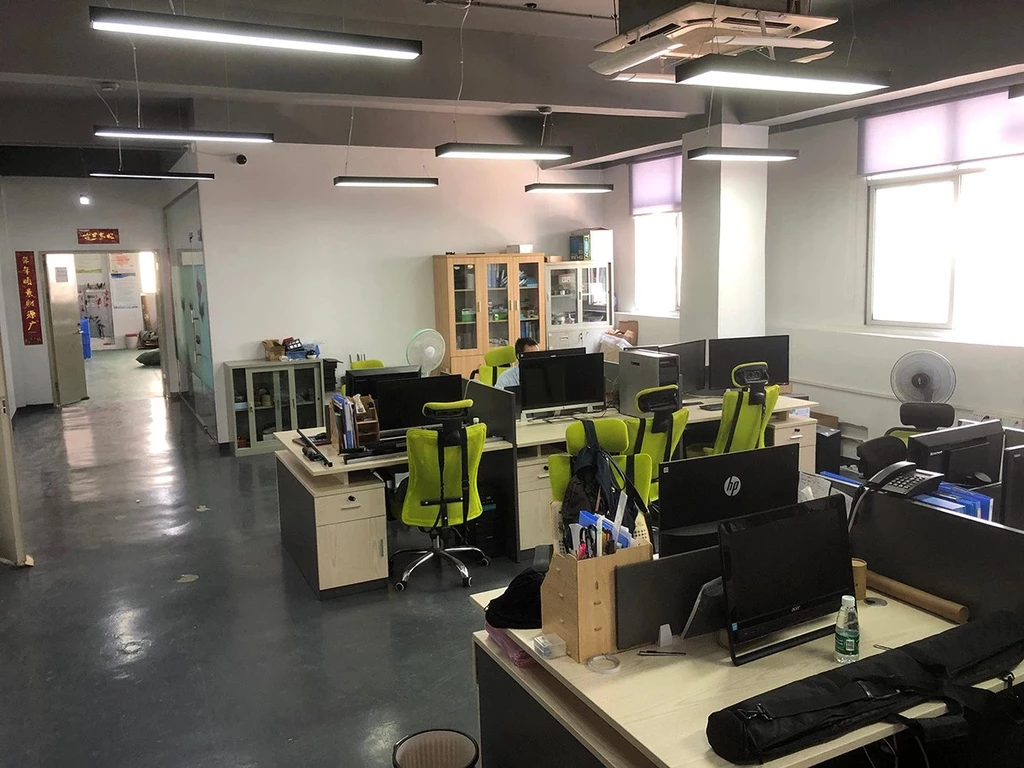 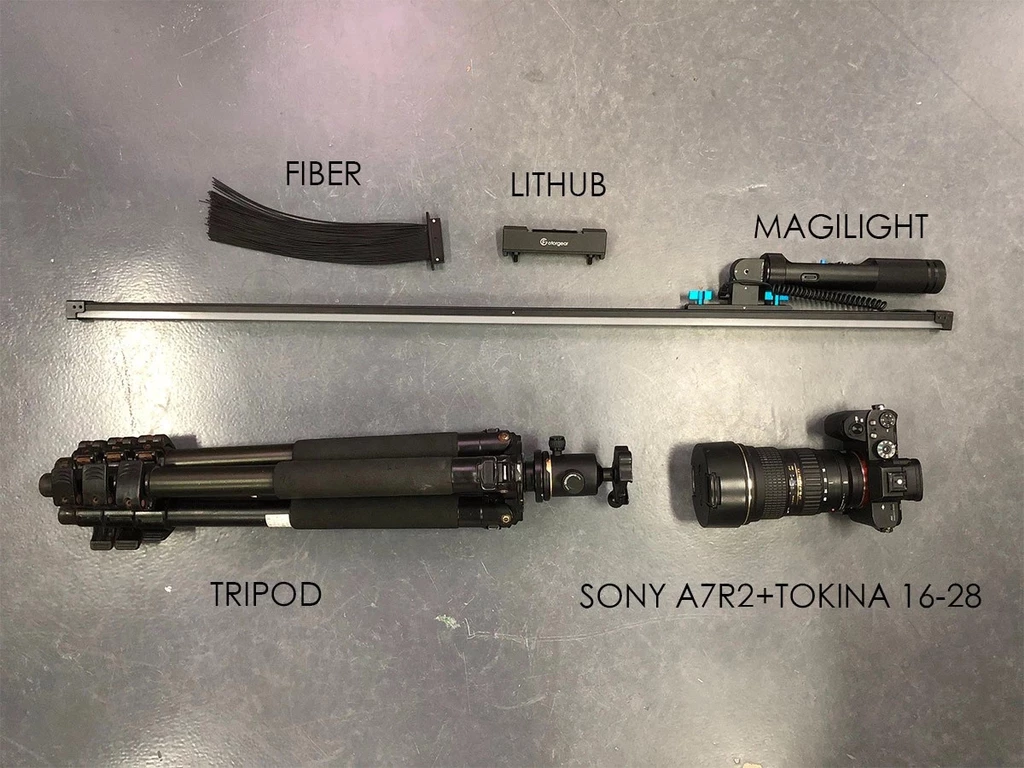 The long stick in the photo is called a Magilight, a product I actually helped to create. It helps me capture more intricate light paintings. I used it to create these ghost images, making sure they looked exactly like the ghosts in my imagination, and I think they came out pretty good.

When creating multiple-light source light paintings like the ones below, it’s incredibly important to balance the brightness, color and proportion of the all the lights you’re using. It’s a matter of trial and error: there will be many shots before you get the perfect one. 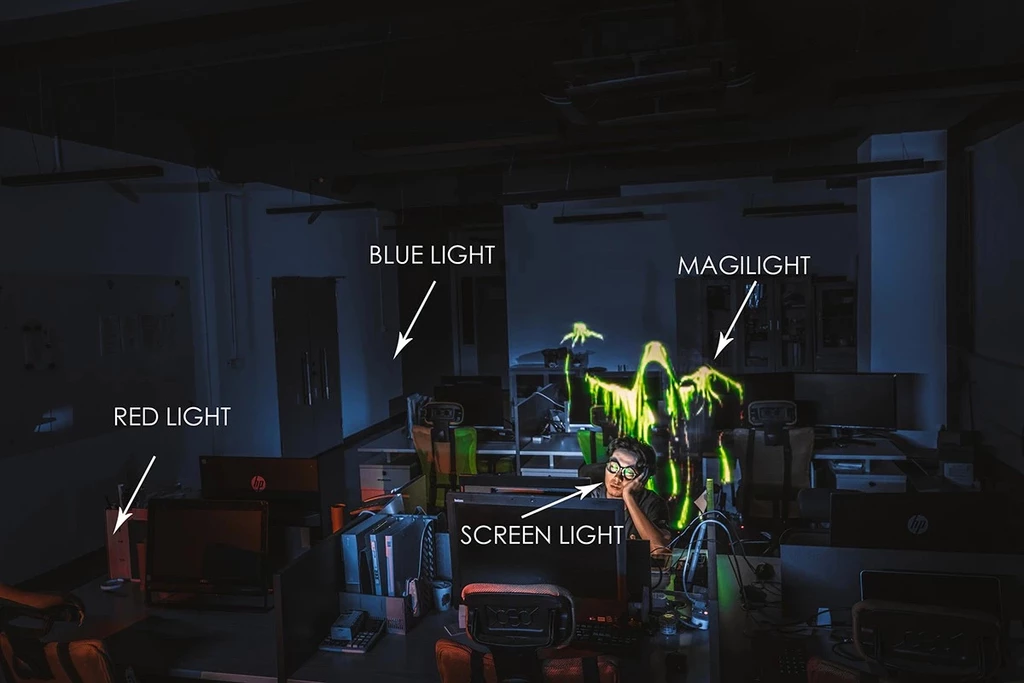 There are four light sources in this shot.

I used two small LED lights as the ambient lighting: one is blue and near the camera, the other one is orange and farther away. These ambient lights help me to create a sense of space, and also balance out the brightness and color of the “paintings” themselves.

For subject of this shot, I used the computer screen as one of the light sources to light up the model’s face, opening up a picture of pure white to ensure that it was bright enough.

Finally, the most important part of light source was the green ghost that I painted with a Magilight behind model, which also cast a green reflection onto the surfaces of the tables and chairs, making it look even more real than I thought it would. 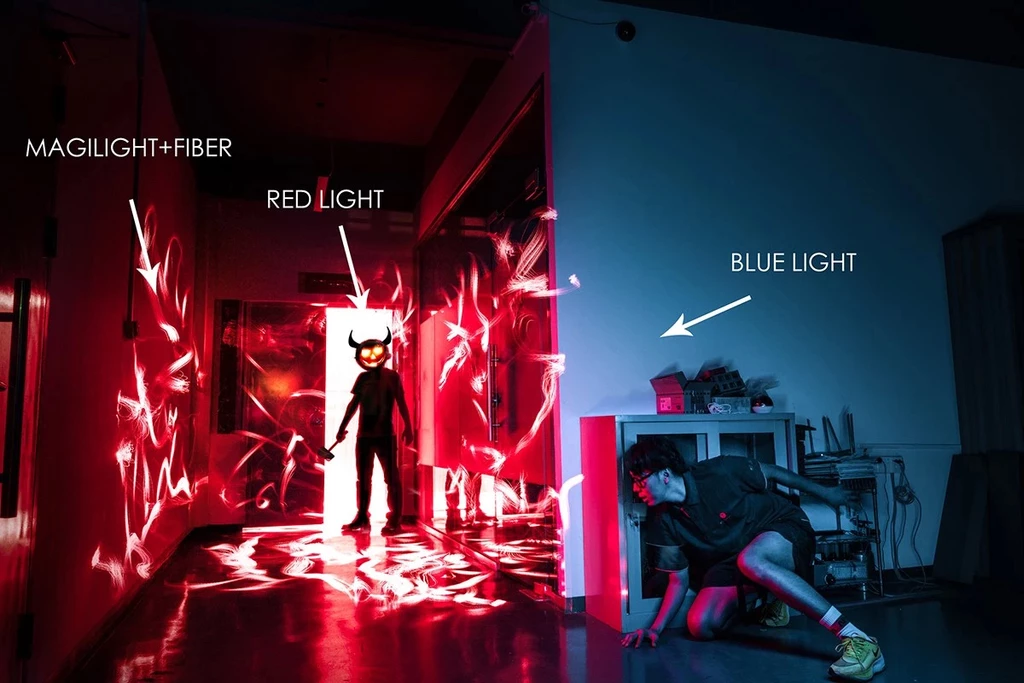 There are three light sources in this photograph.

I used a Magilight (set to solid red) to paint the whole space behind the door. This allows the model to become a silhouette.

Then I switched out the light stick of Magilight for the Lithub with the fiber optic attachment, which I used to paint the walls. I did this to add detail, and also to make the guy on the left side of the frame look even more creepy. Finally, I used a blue LED for ambient light on the right side to balance the photo. It came out pretty well, especial the reflected light of two colors on the model. This one is my favorite.

I used a red LED as the background light in this shot to express the feeling of Halloween, then I painted Death with the Magilight. What I didn’t expect was that the surface of the floor would reflect the beautiful light blue I used to paint Death. It really “makes” the whole scene.

A tip for anyone who wants to do character light-paintings like this: find a spot with reflective ground/water/glass. The reflection will often help make the photo look more “real.”

Lastly, I used the Lithub fiber optic attachment to light up the model’s face. I did this because the light from the screen simply wasn’t bright enough to light up my subject, and I figured the golden light could be something Death was casting onto the subject.

I hope these creations inspire you to go out and try some light painting this holiday season. With any luck, more people will join the light-painting world with me.

Previous Canon Has ‘Moved On to HEIF,’ But Won’t Ditch JPEG Completely… Yet
Next Nikon Confirms that the Z50 Does NOT Have Image Sensor Cleaning