Pulitzer Prize and Emmy-winning photojournalist Barbara Davidson has been booted from the Explorers of Light program after an insensitive tweet aimed at Democratic presidential candidate Julián Castro sparked outrage on social media.

In the tweet that kicked off the controversy, Davidson mocked the former Secretary of Housing and Urban Development for not being able to speak Spanish. “You can’t even speak Spanish and you were born and raised in Texas,” read her initial Tweet. “That speaks volumes.”

Castro responded, quoting Davidson’s tweet and asking her “What do you think it says?” which led to immediate backlash from the Latinx community and beyond. The tweet was called out as misguided at best and racist at worst, and people began tagging Canon demanding Davidson be removed as an ambassador: 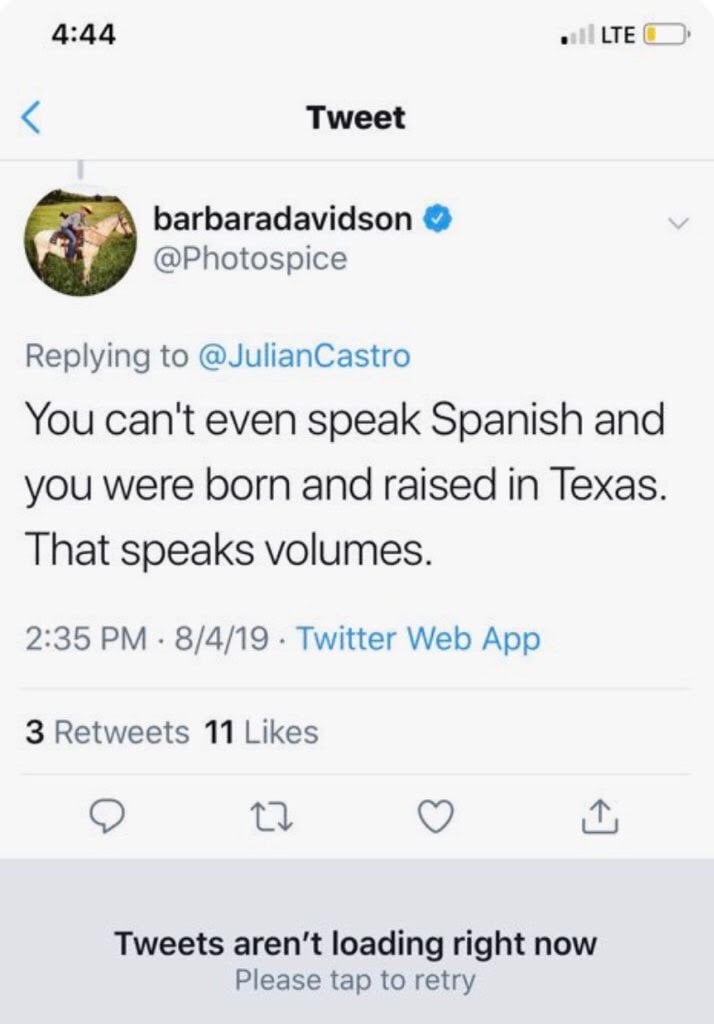 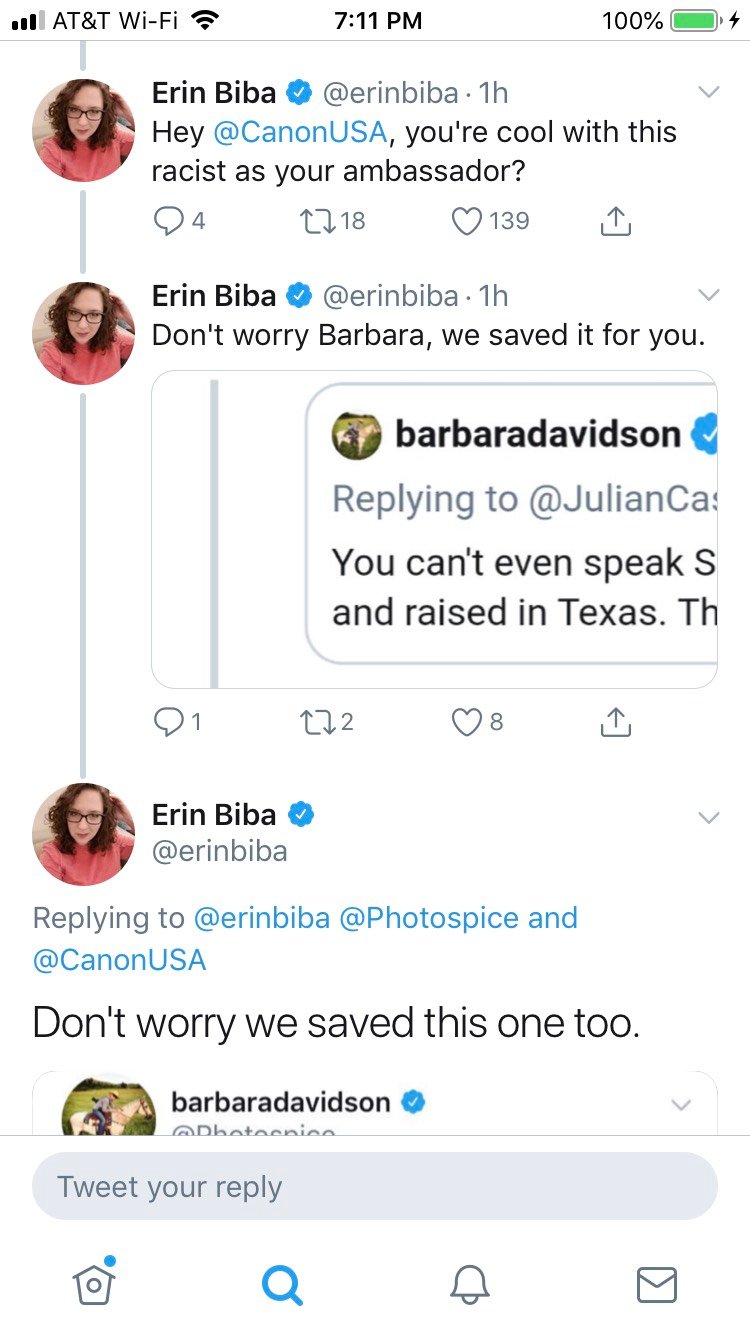 As someone who doesnt speak Spanish and I have a Mexican mother, I think it means @Photospice and other white people believe racial progress is measured by how fast minorities lose their culture and language and try to fit into “white America”.

She says ignorant things calls you a coward and then can’t take people calling her out and starts deleting tweets and then closes her account. Even if you claim to belong to the same party like she does, ignorance should be called out when it is displayed.

People say ignorant things. It’s not a crime, it can be a learning moment. I granted #BarbaraDavidson that & let her know directly/openly that her comment was offensive. Her response was to threaten, falsely report & pathetically lie (“leaving social media due to vision”). Wrong. pic.twitter.com/dG6GDg1iw1

Hey @CanonUSA, when your “ambassadors” say really stupid things how do you handle this? Asking for a friend. 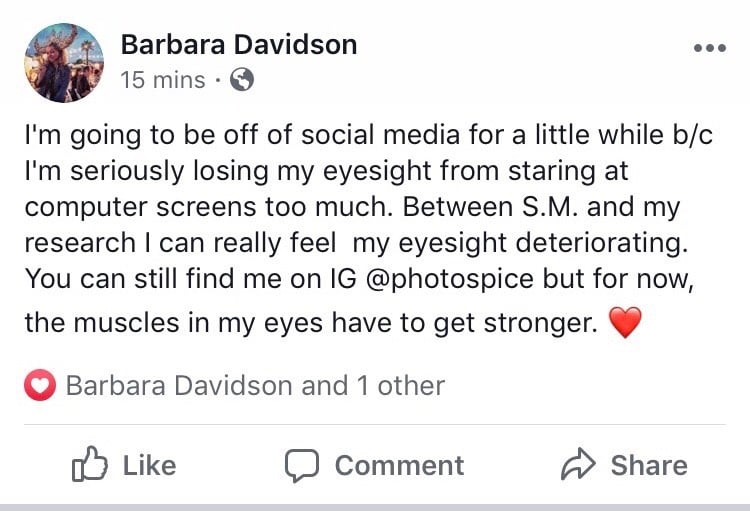 However, a few days later, she returned to Twitter and posted a lengthy apology. It, too, disappeared when her account was deleted, but an anonymous source shared it with PetaPixel directly.

“My recent tweets about Secretary Castro’s ability to speak Spanish were insensitive, ignorant, and contributed to a culture of hate playing out in this country right now, and for that I am deeply sorry,” wrote Davidson. “I profoundly regret my ignorance and the pain I have caused because of it.”

You can read the apology in full below:

Two separate sources—who asked to remain anonymous—reached out to us about this story, sending us the screenshots above and calling into question the authenticity of her apology. One called her “one of the most celebrated, yet toxic people in photography.” Another shared a first hand account, claiming Davidson tore them down over social media “a few years ago,” telling them “that no one liked me and I would never be a good photographer, all because I disagreed with her on a post she made.”

Meanwhile, former colleagues of Davidson’s from the LA Times weighed in with similar sentiments:

She comes and she goes, admirable talent and horribly offensive comments to and about the staff. Her sarcasm was as lethal as a sword.

Ultimately, the sincerity of the apology is a moot point. The calls for Davidson’s removal from the Canon ambassador program worked.

She has been removed from the program’s landing page, and while a Canon spokesperson said they “have no further comment on this matter,” Davidson did reply to our request for comment, confirming Canon’s decision and expressing her remorse at the situation anew:

Thank you for reaching out to me. I’m glad you have my apology. Yes, Canon terminated my contract because they couldn’t risk a consumer boycott. My Twitter comments were culturally insensitive and some Castro supporters accused me of racism, so I completely understand their decision. I loved working with Canon, and it is heartbreaking to no longer have that relationship with them but I own my mistake and accept the consequences. My work speaks to who I am as a person. I feel grounded in that. I made a brutal mistake and I have to live with that.

What do you think of the controversy? Is Davidson the victim of an unjust “trial by social media,” or did Canon do the right thing by removing her from the program? For now, Davidson seems content to lay low, admit wrongdoing, and accept the consequences of her ill-advised tweets.

Previous How to Make a DIY Mottled Backdrop for Just $30
Next Leica Unveils the Summicron-SL 50mm f/2 ASPH for $4,495