Canon is gearing up to announce its second full-frame mirrorless camera following the EOS R. It you can’t wait for the official announcement just around the corner, today’s your lucky day: the upcoming Canon EOS RP has been revealed in leaked photos and specs.

From the photos, we see that the RP isn’t just the same R body with modified specs and features. We can see that the design and form factor are noticeably different (and the RP is smaller):

Nokishita, which first published the photos, reports that the Canon EOS RP will feature a 26.2-megapixel full-frame CMOS sensor with Dual Pixel CMOS AF and a DIGIC 8 image processor. 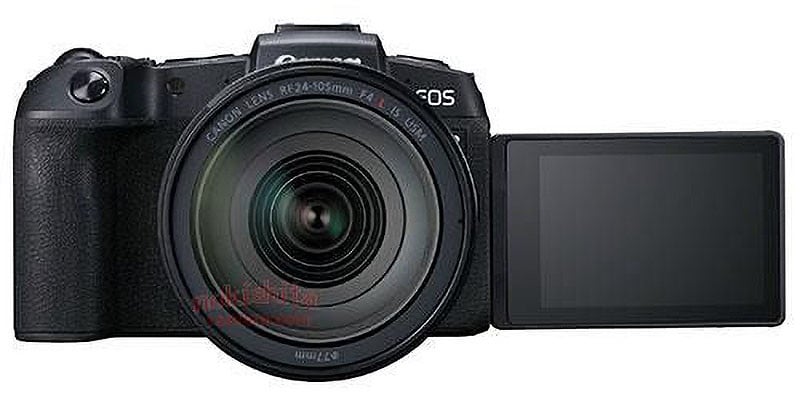 The back of the camera actually looks quite similar to the EOS R, except it omits the “Multifunction Touch Bar”:

Other features and specs include 5fps continuous shooting, an ISO range of 100-40000 (expandable to 50-102400), an OLED electronic viewfinder, a 3-inch swiveling LCD touchscreen, dual sensing IS, DLO in camera, RAW development in camera, and C-RAW compatible.

The top of the camera omits the dot-matrix LCD found on the EOS R:

The Canon EOS RP will be a lower-end camera in Canon’s full-frame mirrorless lineup, but Canon is also reportedly planning to unleash a flagship model with ultra-high resolution (there’s word of 100MP+) and in-body image stabilization. But first, this RP model that’s geared more toward the masses of serious photographers.