Celebrity photographer Marcus Hyde—whose CV includes clients such as Kim Kardashian, Kanye West and Ariana Grande—is being accused of bribing a model to send him nude photos, a claim that inspired other models to share more serious accusations of sexual harassment and even assault.

The incident began when LA-based model Sunnaya Nash responded to an Instagram post by Hyde in which he asked if anyone wanted to shoot. This kind of model call is pretty common on the social network. What happened next is not.

In a series of messages that Nash later posted to Instagram and then Twitter (once they were taken down for violating Instagram’s anti-bullying policies) Hyde repeatedly asks Nash to send him fully nude photos of herself in exchange for a free photo shoot. Otherwise, the shoot would cost $2,000.

Even after Nash agreed to pose nude during an official shoot, but refused to send nude photos ahead of time, Hyde maintained that he would charge her $2,000 because he had to “see if your [sic] worth it.” You can see the conversation in the screenshots below: 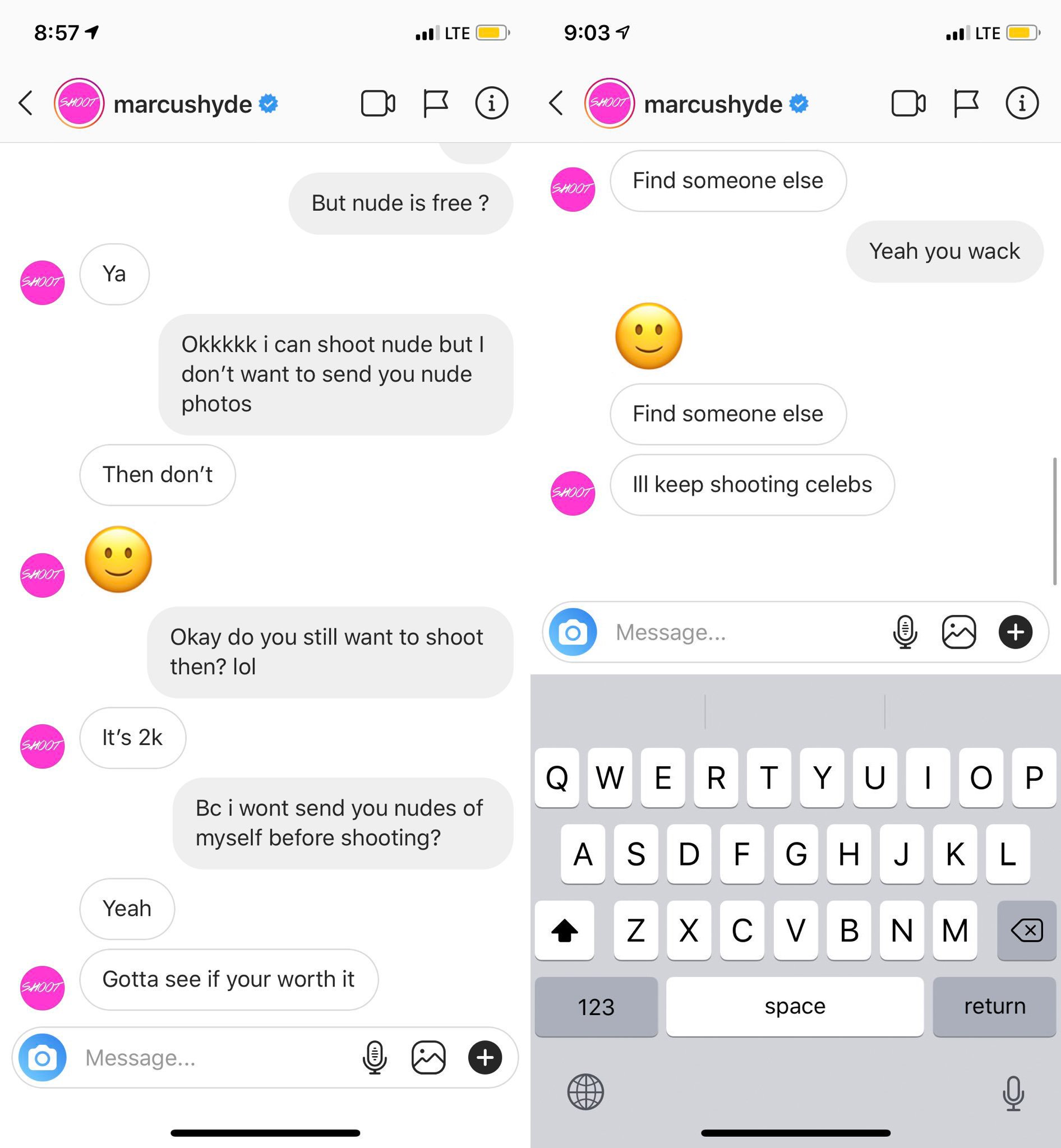 After Nash posted the original conversation to her Instagram stories, Hyde allegedly responded to one of her supporters with a profane message before ultimately deactivating his Instagram once the story began to pick up steam.

But the story doesn’t end there, because once Nash posted the screenshots to her Instagram and Twitter, numerous other models came forward to share their negative experiences with Hyde. One claimed Hyde “straight up sexually assaulted me” before his career took off photographing Kim Kardashian. Another claimed she actually did send Hyde nudes earlier in the week. “He screen shotted them, then avoided any arrangement to try and shoot,” she wrote to Nash. “I feel disgusted and sick and violated.”

Others shared detailed accounts of sexual harassment and assault that are difficult to read. You can find them in the screenshots below, but please be forewarned that some of these descriptions are explicit and may be upsetting to some readers:

The original screenshots and the horrifying stories that followed prompted one of Hyde’s most prominent clients, Ariana Grande, to speak out, releasing a statement in which she encourages models to “not shoot with photographers who make you uncomfortable or make you feel like you need to take your clothing off if you don’t want to.”

She doesn’t call Hyde out by name, but mentions “shocking and really heartbreaking stories” that she’s been reading and says that, “If they tell you you have to pay more money if you’re clothed that’s f***ed and I’m sorry that has happened to you.”

You can read the full statement below:

I have just read some shocking and really heartbreaking stories. I hate that this is a conversation but please do not shoot with photographers who make you uncomfortable or make you feel like you need to take your clothing off if you don’t want to. If you want to, sick. But if you don’t, please don’t. If they tell you you have to pay more money if you’re clothed that’s f***d and I’m sorry that has happened to you. I promise there are so many respectful, nice, talented photographers out there.

I hate hearing about things like this. I am sorry that that was anybody’s experience and know that it doesn’t have to be.

Look out for one another. Tag your friends on posts of other photographers [whose] work you like and have had positive experiences with and help each other get connected.

The original screenshots and the many accusations that followed have since made national news, but Hyde has yet to comment on the stories publicly.