Over the past year, I’ve been pushing my images into more abstract, painterly directions. As digital images seem to be moving into a realm of hyperrealism, I find myself longing for gritty tangibility. Since I have always more in the get-it-in-camera camp, I have been experimenting with a range of techniques and materials to try and achieve the look I’m after.

I started off this past spring by adding substances such as coconut oil and honey to glass and then shooting through it.

After that, I moved on to shooting with imperfect, fungus-covered lenses to get a hazy, dreamlike quality. Next, I tried my hand at capturing distorted reflections in mylar.

Most recently I explored what broken mirrors can add to an image.

All these experiments have worked together to inform my process in terms of optimal focal length, aperture, and light quality/direction when working with multiple planes, textures, and reflections. Now that I better understand how to manipulate these mediums I can walk through a hardware store, for example, and visualize how certain materials would look when photographed and lit a certain way, which is exactly what I did last week.

My model Rachel arrived and we chatted for a bit as I finished distressing an air filter (the kind you use in an air conditioner unit) that I had purchased for the shoot. In an effort to make it more transparent I had needed to separate the fibers a bit more.

Once it was ready, I hung it in front of Rachel, then placed a blue-gelled light in a position that it would light both her and the filter, and I angled a red-gelled light into the backdrop. The resulting images are smoky and mysterious, and I was more than just a little excited. 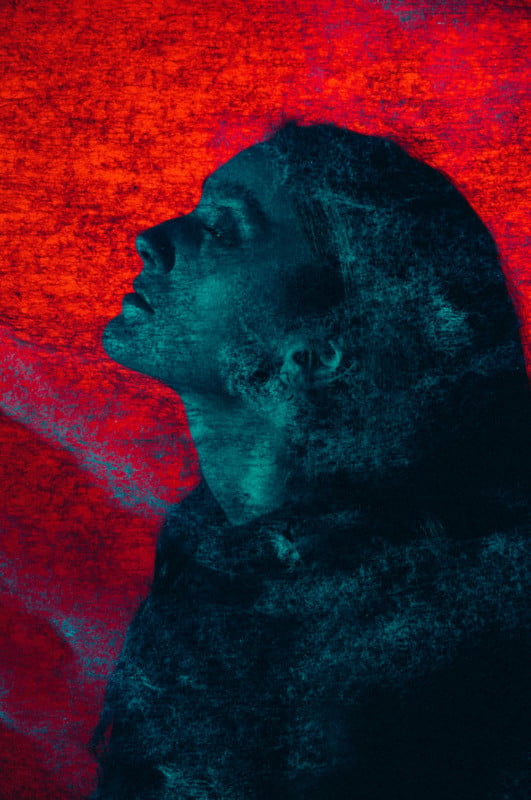 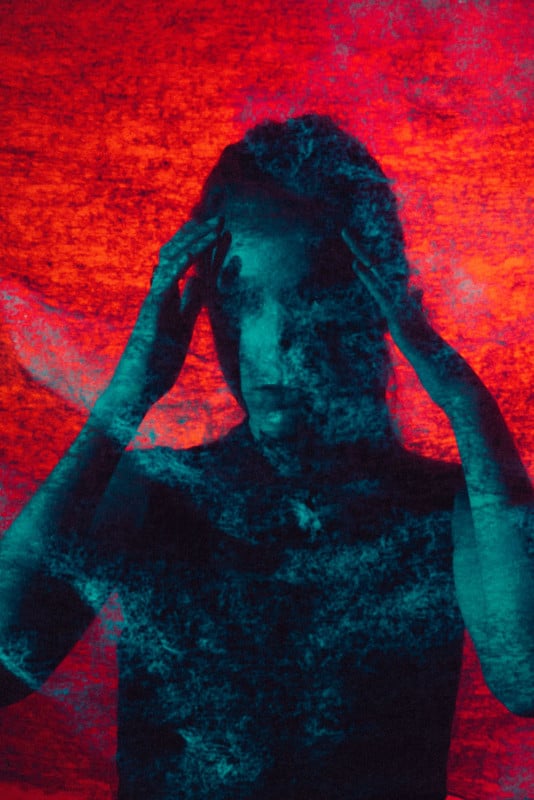 The second thing that I acquired at the store was a spool of steel wire. I had visualized cutting a number of lengths of wire, hanging them from a boom arm, and bending them into the desired position around my subject. Cutting the strips and manipulating them into shape took some time, which I found to be quite therapeutic, and it brought back fond memories of art school sculpture class.

When it came time to photograph them, I explored several different ways of photographing them: placing the subject behind the wire while using a shallow depth of field, leaving her out of focus; placing them both on the same focal plane and using a smaller aperture; placing the wire in front of the model while using hard light to pick up the shadows. I couldn’t pick a favorite. 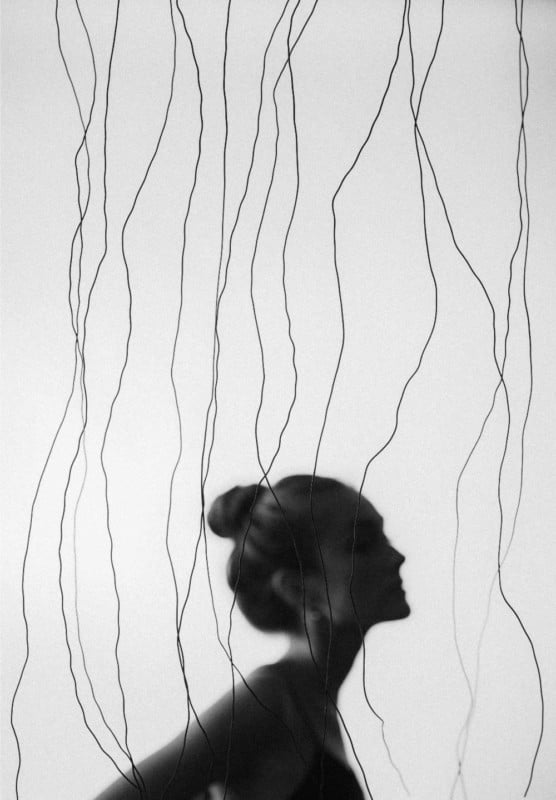 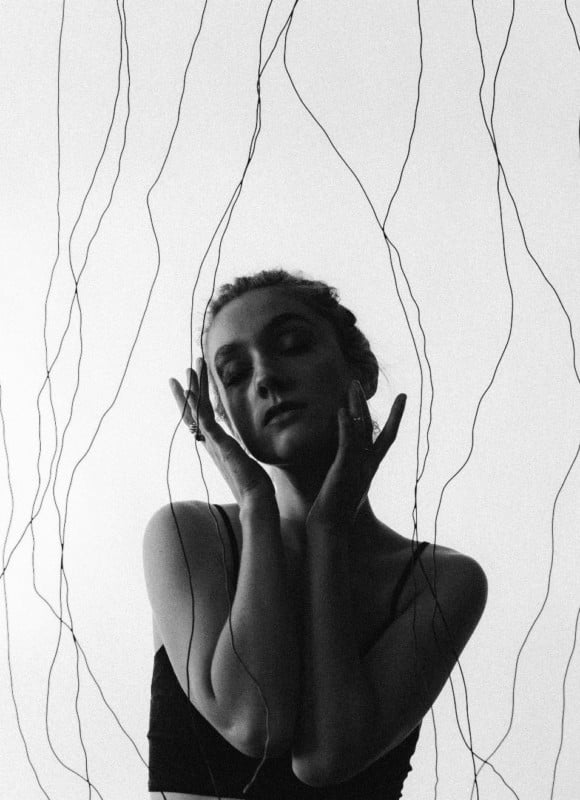 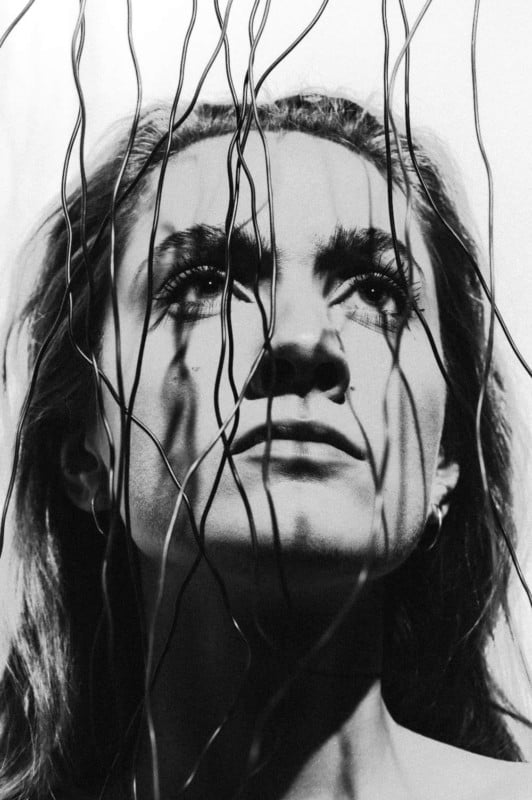 For the final look, Rachel wanted to shoot with the broken mirror I have sitting in my studio. Since I had already photographed it several times in the past couple of weeks I wanted to use it in a new way. In prior shoots, I had made the cracks the central focus, and this time I wanted to instead capture the prismatic effect of the multi-planed surface.

I had Rachel stand further away from the mirror and I used a wider aperture and longer focal length lens to really throw the cracks out of focus. This resulted in more airy, ethereal images than ones comprised of the heavy, well-defined cracks. 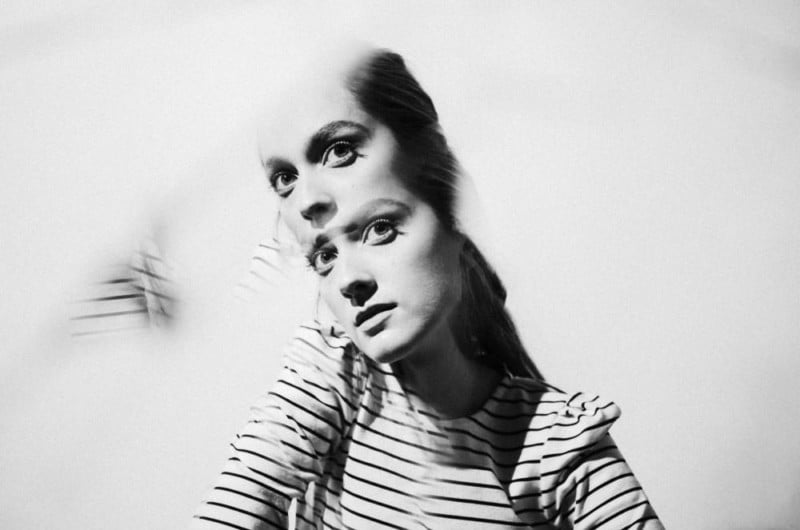 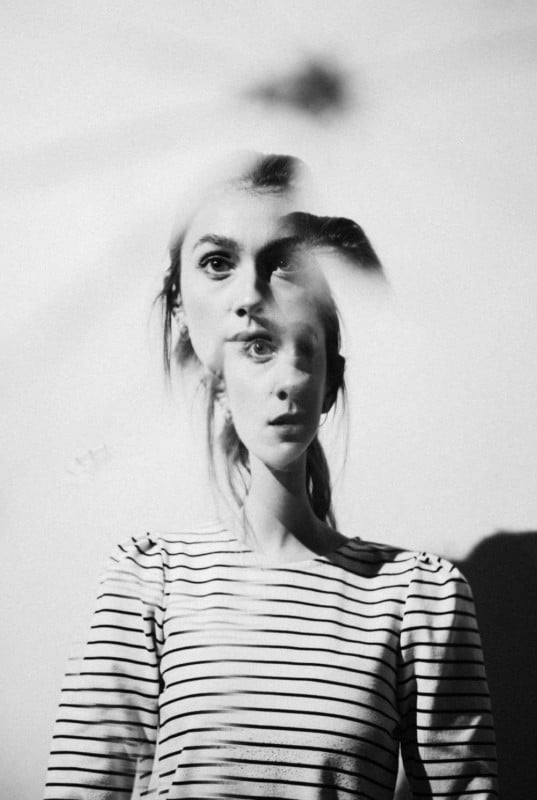 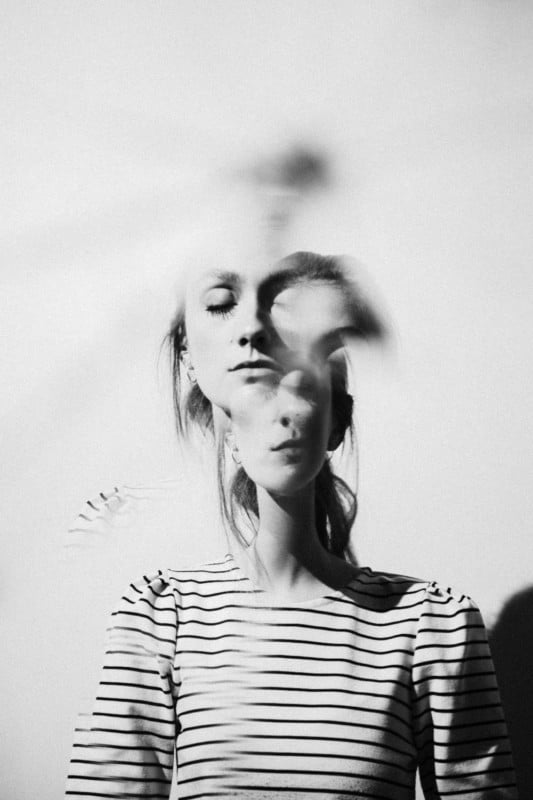 I have really enjoyed these added sculptural elements in my shoots these past six months. I love the innate symbolism in the materials that I choose to work with, which can be implemented into my shoot concept. I’m now assessing almost everything around me as a possible element to be used in future shoots. This renewed sense of curiosity and wonder may be my most important discovery yet.

P.S. In case you missed it I’m teaching a two-day creative portraiture workshop in Los Angeles, Columbus, and NYC in January 2020. These are exactly the kind of techniques we will be exploring. For more info, go here.

About the author: Nick Fancher is a Columbus, Ohio-based portrait and commerce photographer. You can also find more of his work and writing on his website. His popular books can be purchased on Amazon. This article was also published here.

Previous Original NASA ‘Red Number’ Prints Up for Auction, Expected to Fetch Thousands per Photo
Next How the Table Affects Lighting When Shooting Bottles