Fujifilm Acros 100 Film to be Killed Off in October 2018, Report Says

It may soon be time to say goodbye to another popular film among analog photographers. A new report is saying that Fujifilm’s Neopan 100 Acros will be discontinued in October of this year.

Casual Photophile reports that the news comes from translations of documents that were distributed to film dealers in Japan. 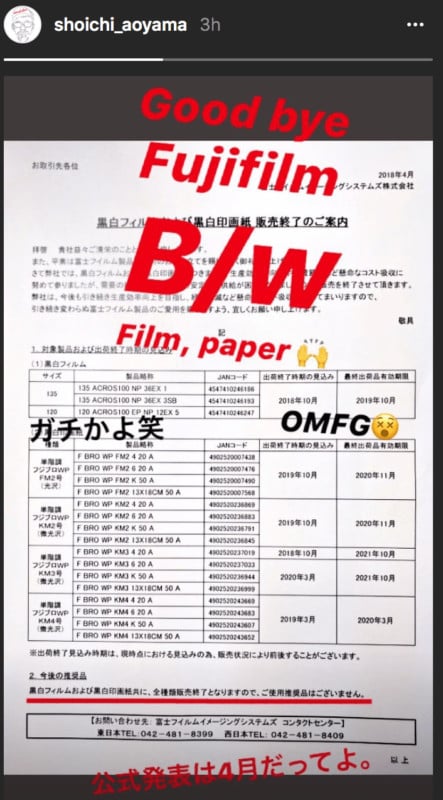 “As of this writing, consumers and US-based distributors haven’t seen any direct announcement from Fuji and my requests for confirmation from Fuji have not yet been answered,” Casual Photophile writes. “That said, this is technically a rumor, but these sources should be reliable and this follows a historically consistent pattern.”

Fujifilm has been slowly winding down a number of its film lines (and branded film emulsions such as Agfa Vista) in recent years while its Instax film has been booming. The discontinuation of 4×5 Acros 100 was announced in late 2017 and will take place in May 2018, and now it seems that the 35mm and 120 versions of the same film will be meeting the same fate, putting an end to the Acros line completely.

Fujifilm Neopan 100 Acros is a professional ortho-panchromatic (i.e. reduced red sensitivity while being sensitive to all wavelengths of visible light) black-and-white film that’s praised for its sharpness and grain.

“The film is particularly suited for night and long exposure photography due to its reciprocity characteristics,” Wikipedia states. “[I]t does not require adjustments for exposures shorter than 120 seconds, and only requires a ½ stop of compensation for exposures between 120 and 1000 seconds.”

Due to its popularity, the apparent imminent demise of Acros will be a heavy blow to film photographers. If Acros is among your favorite film stocks, now might be a good time to start stocking up.