Three hours ago, during the Fujifilm X Summit in Tokyo, Fuji officially announced the development of the X-Pro3 rangefinder. This camera, which was a long time coming, promises better performance in a more durable and lightweight package that should particularly delight street photographers.

For a development announcement, Fuji actually shared quite a bit about the camera in their livestream. After talking for a while about the durability and challenges of working with Titanium, they revealed the camera by showing the logo being laser etched onto a titanium top plate at the factory: 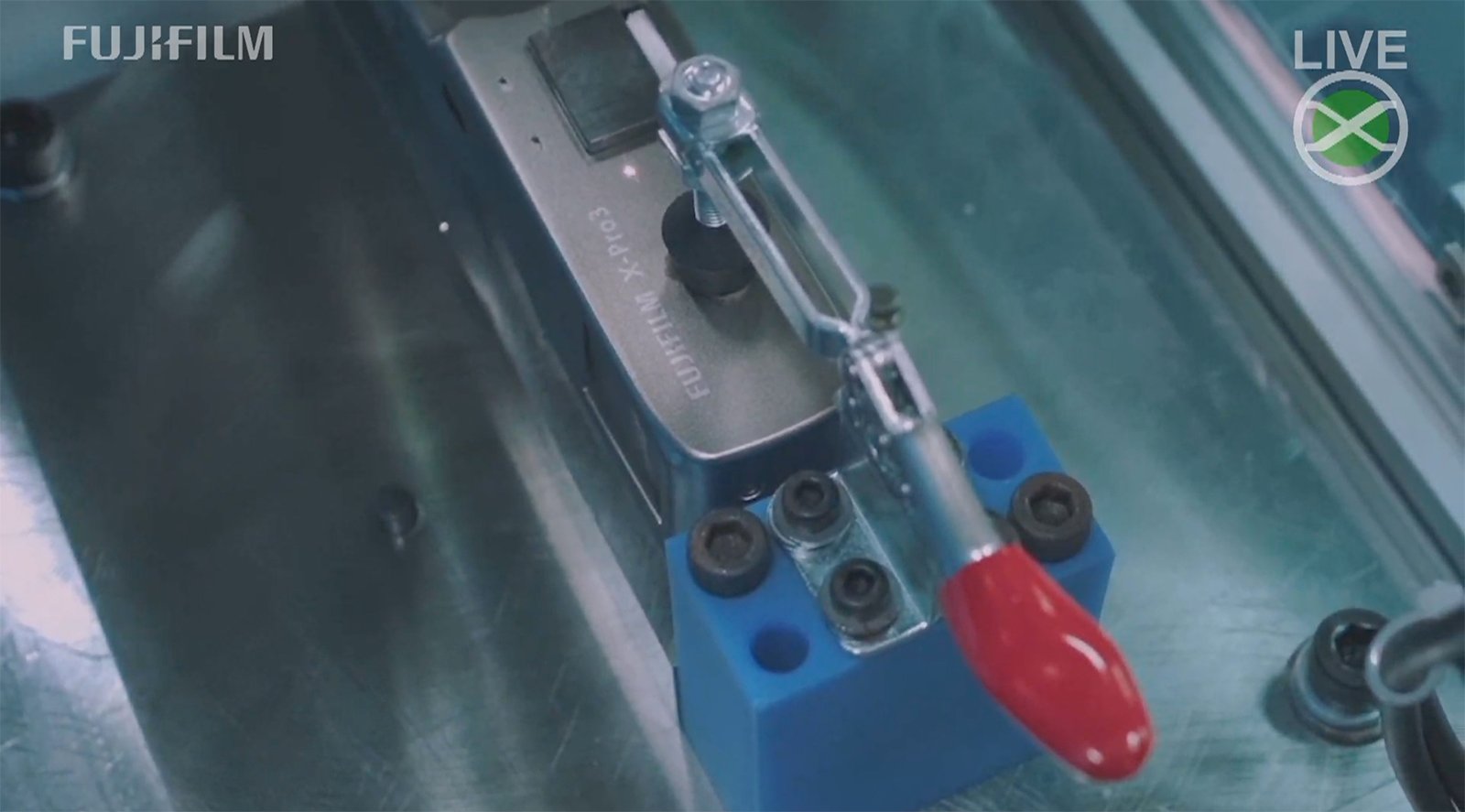 Fuji then talks about the upgrades they’ve made to the X-Pro series one by one.

First, they explained how they chose to make the camera more durable by using titanium. Titanium is very hard, and retains heat, making it difficult to work with. This is why we haven’t seen too many titanium cameras since the film days—most companies prefer magnesium alloy or aluminum. But for sheer strength and durability, Fuji found a factory that could do this for them, and has chosen to make parts of the X-Pro3 from titanium.

Next, Fuji explained that they’ve completely upgraded the hybrid viewfinder.

For the optical viewfinder, Fuji claims they’ve reduced distortion “significantly” and increased the angle of view, so you see more of your frame and you see it more clearly. The electronic viewfinder uses a brand new EVF panel that promises higher resolution, higher contrast, better brightness, a wider color space, and an improved frame rate. 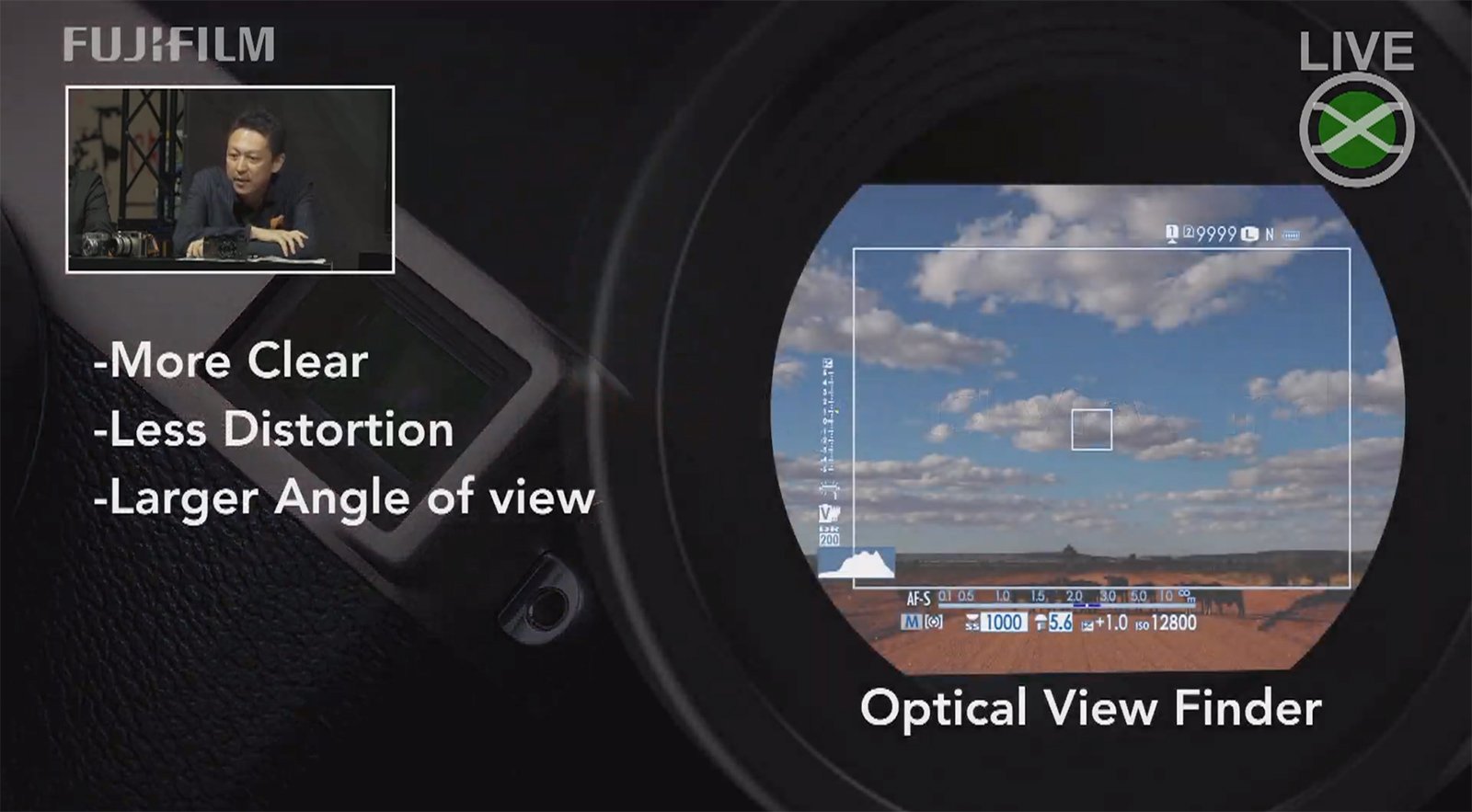 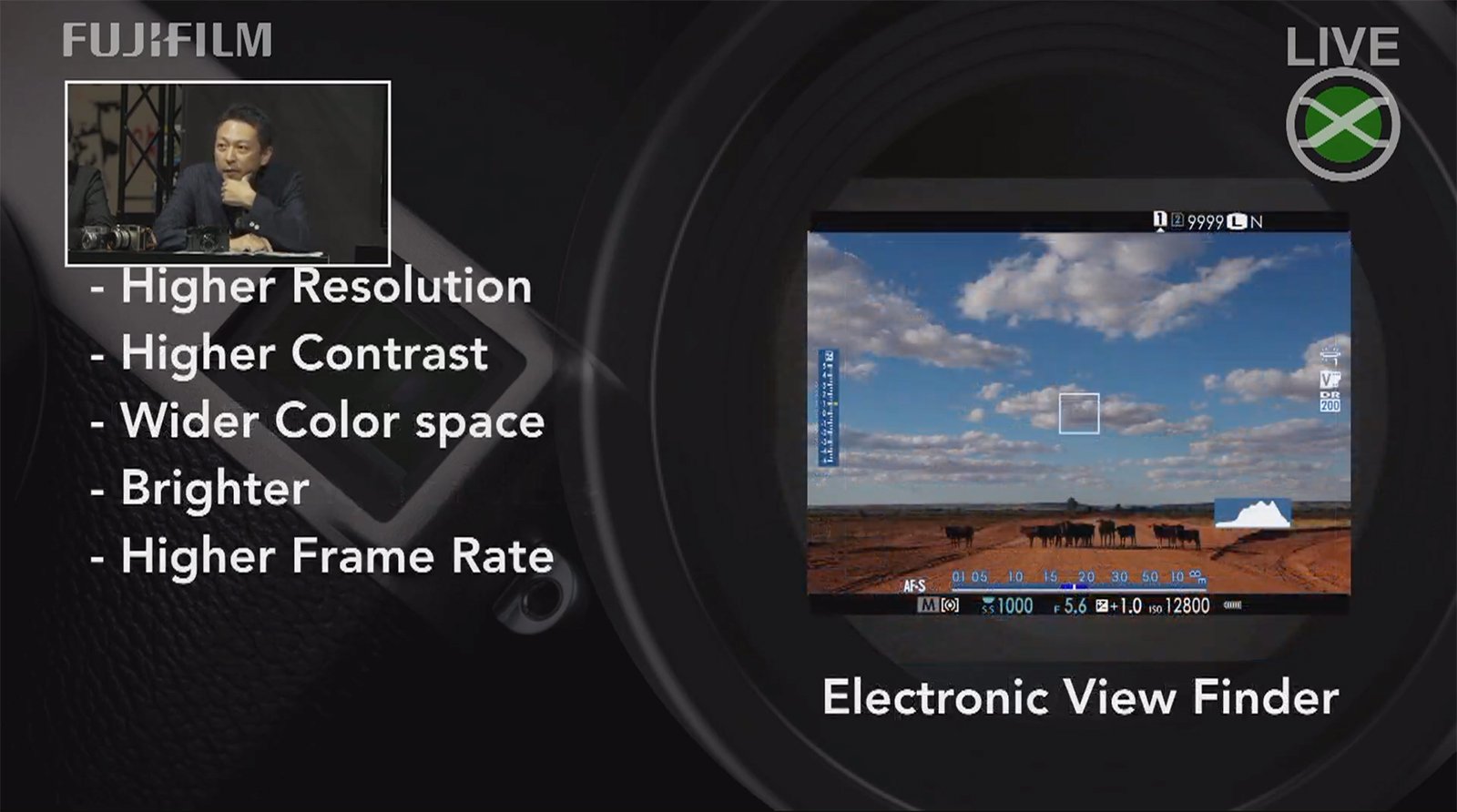 Next, the biggest change: they’ve removed the traditional rear LCD in order to “keep photographers looking through the viewfinder” and “minimize the time looking at the back of the camera.” Instead, you get a small LCD with just basic settings—the kind you usually find on the top plate of the latest full-frame mirrorless cameras—on the back of the camera: 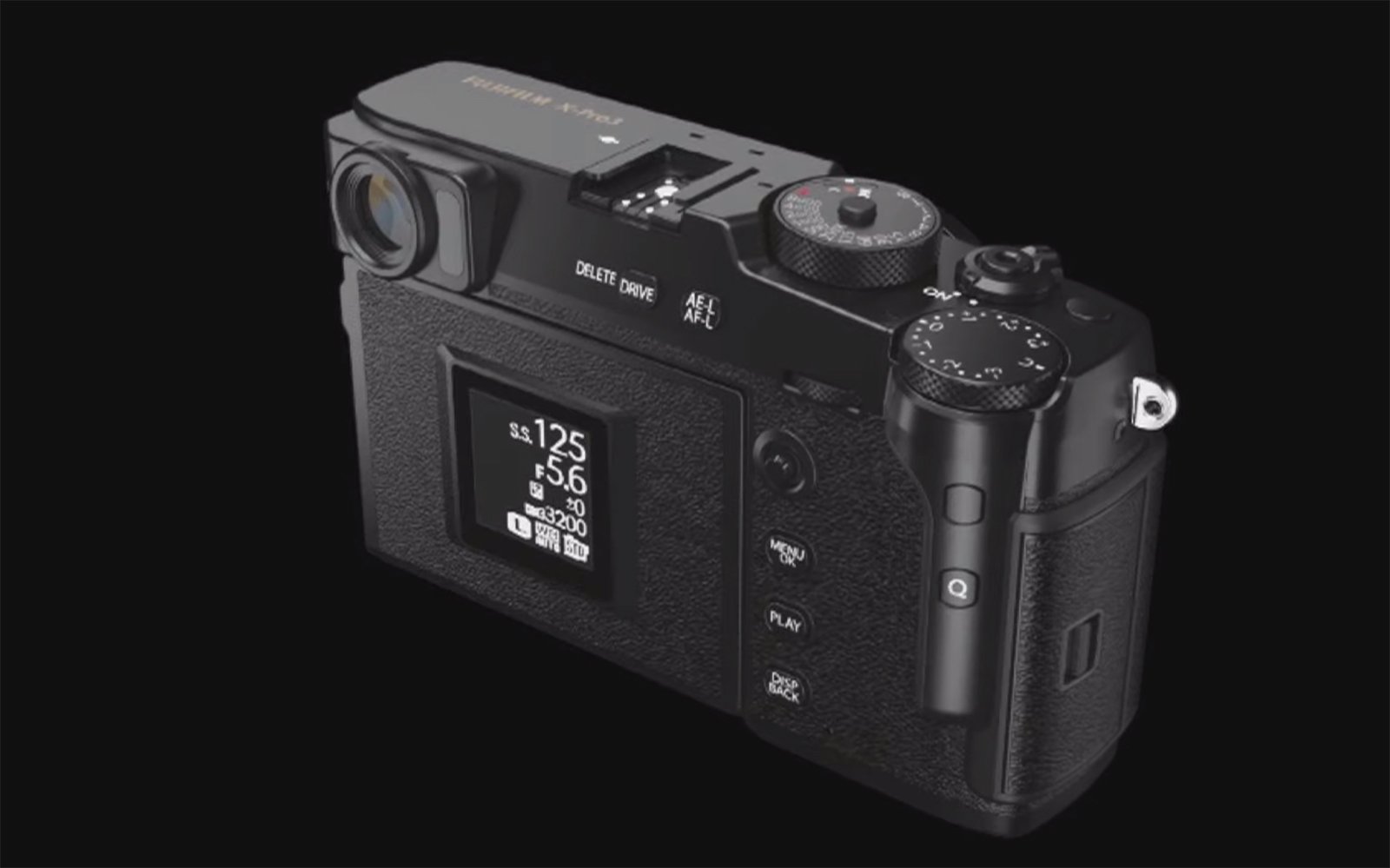 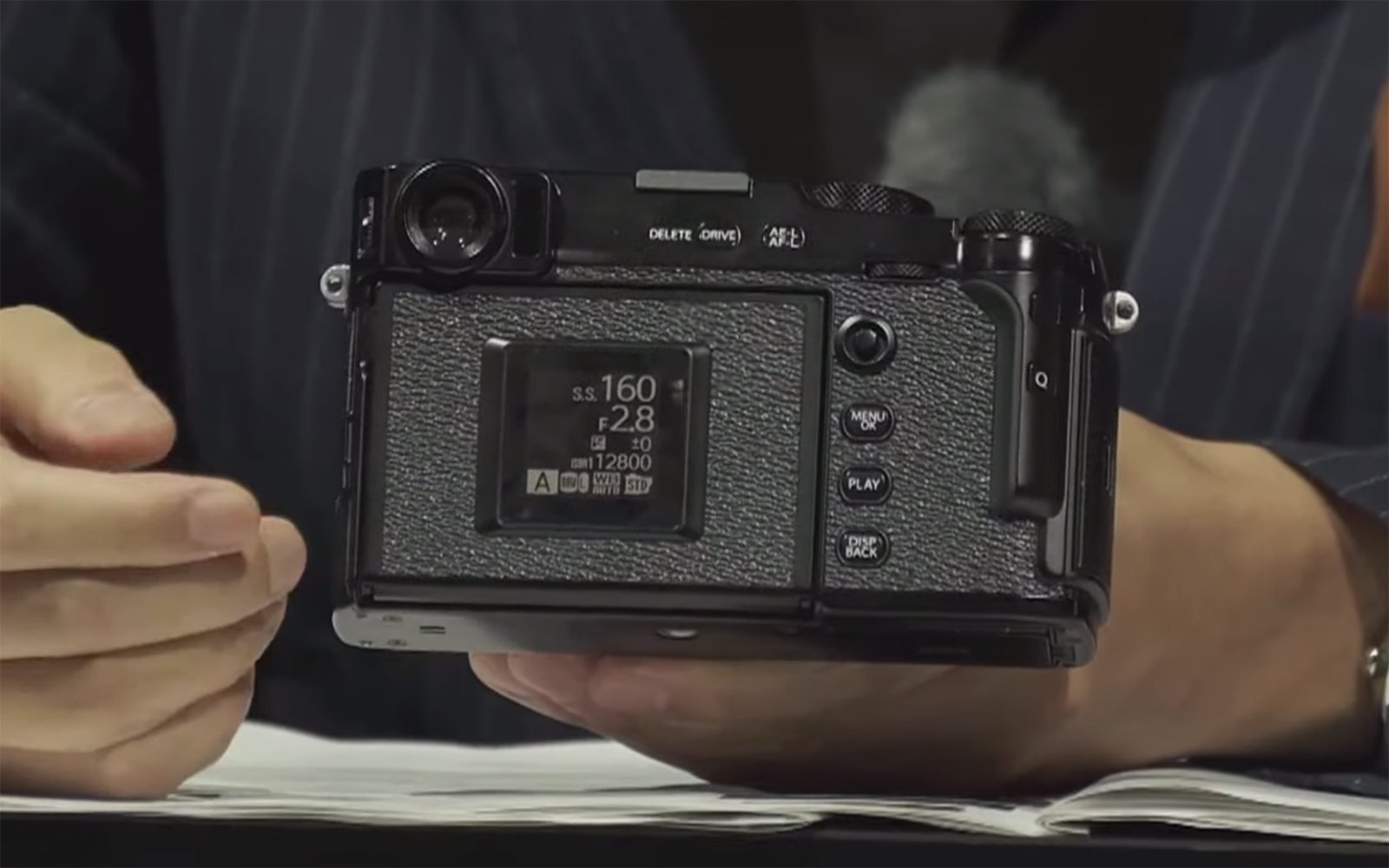 And a hidden LCD for image review and waist level shooting that swings downwards: 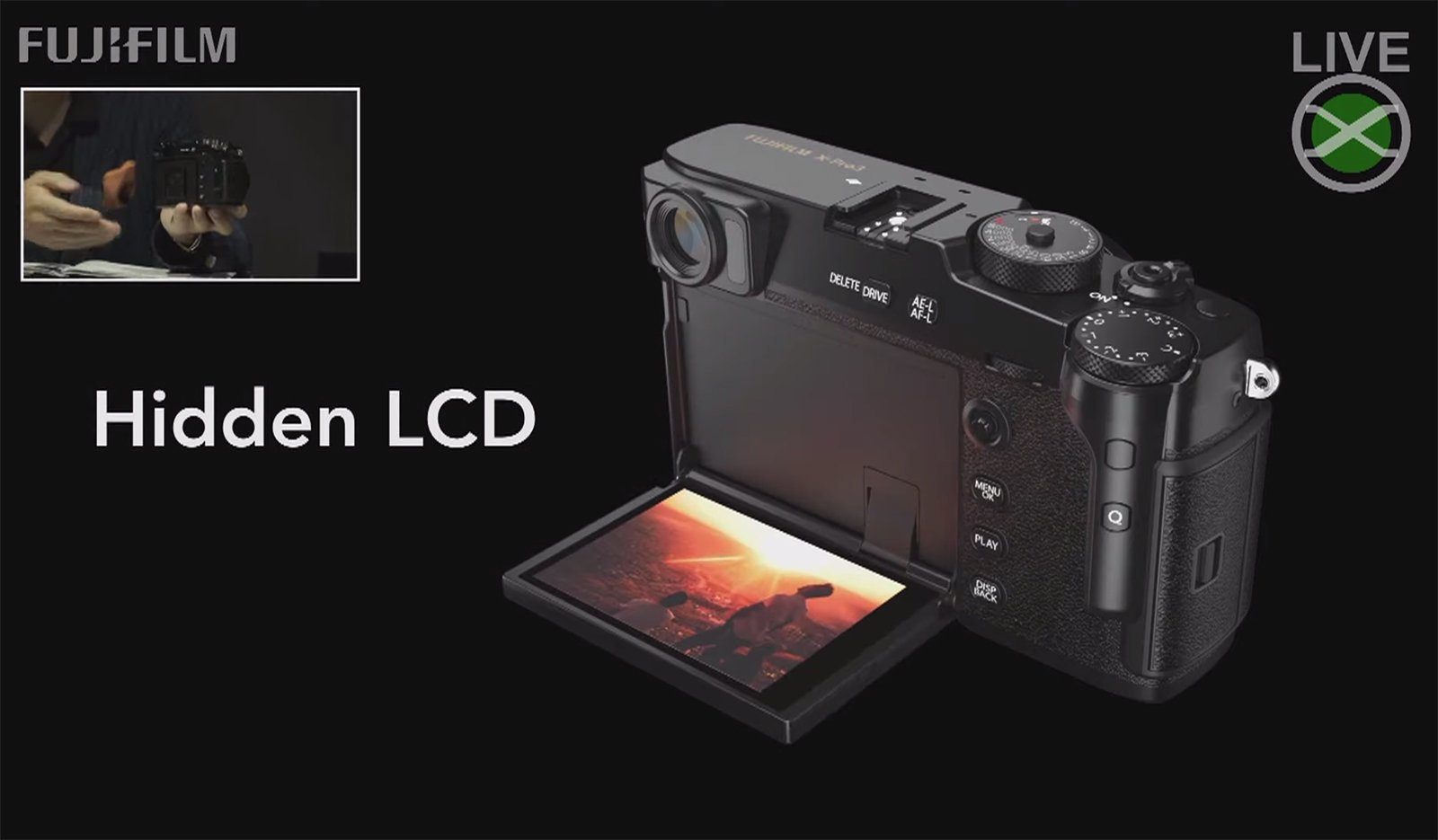 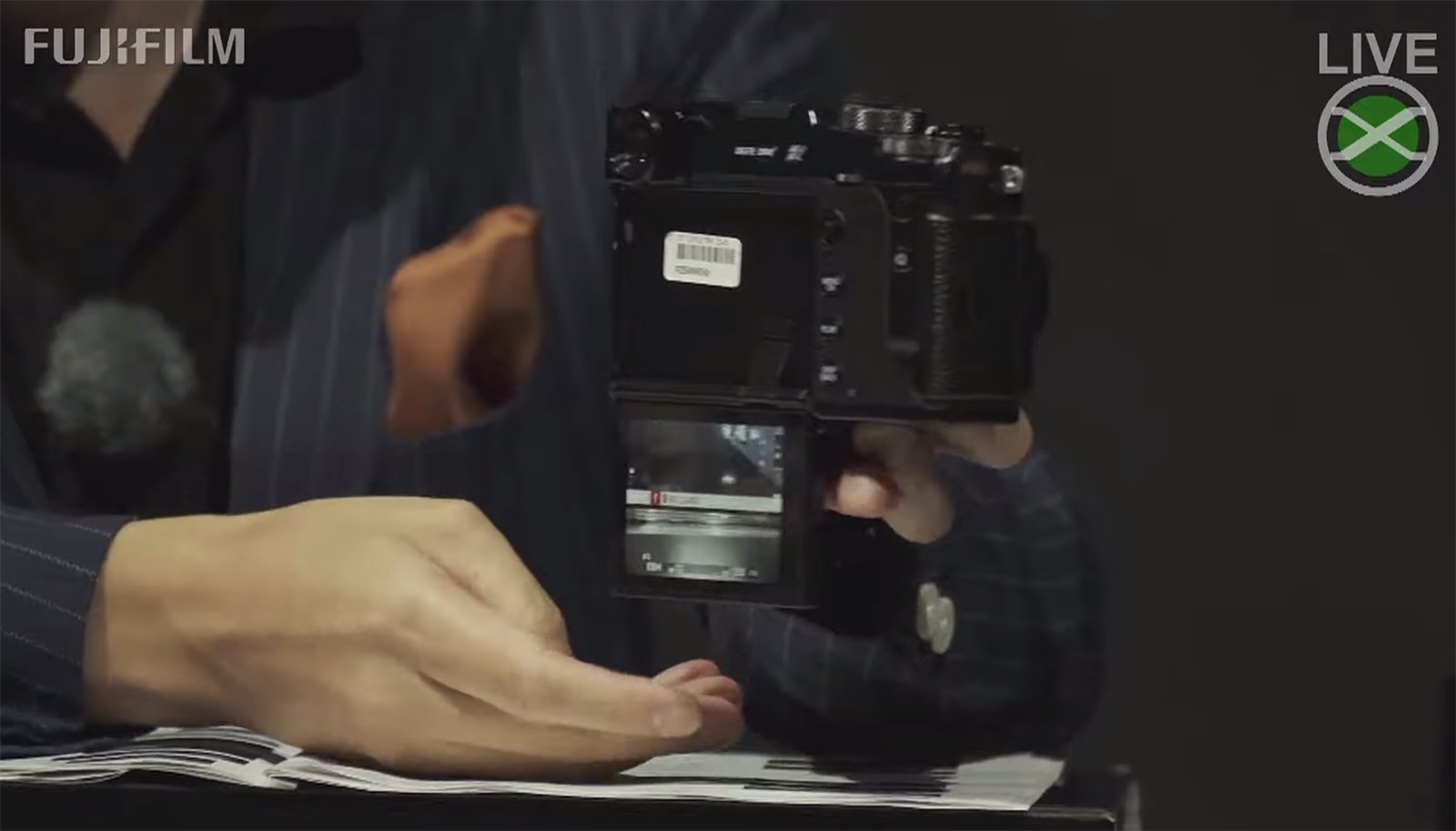 That rear LCD can even show the film simulation you’re using, just like you used to put the square from your film package into the slot on the back: 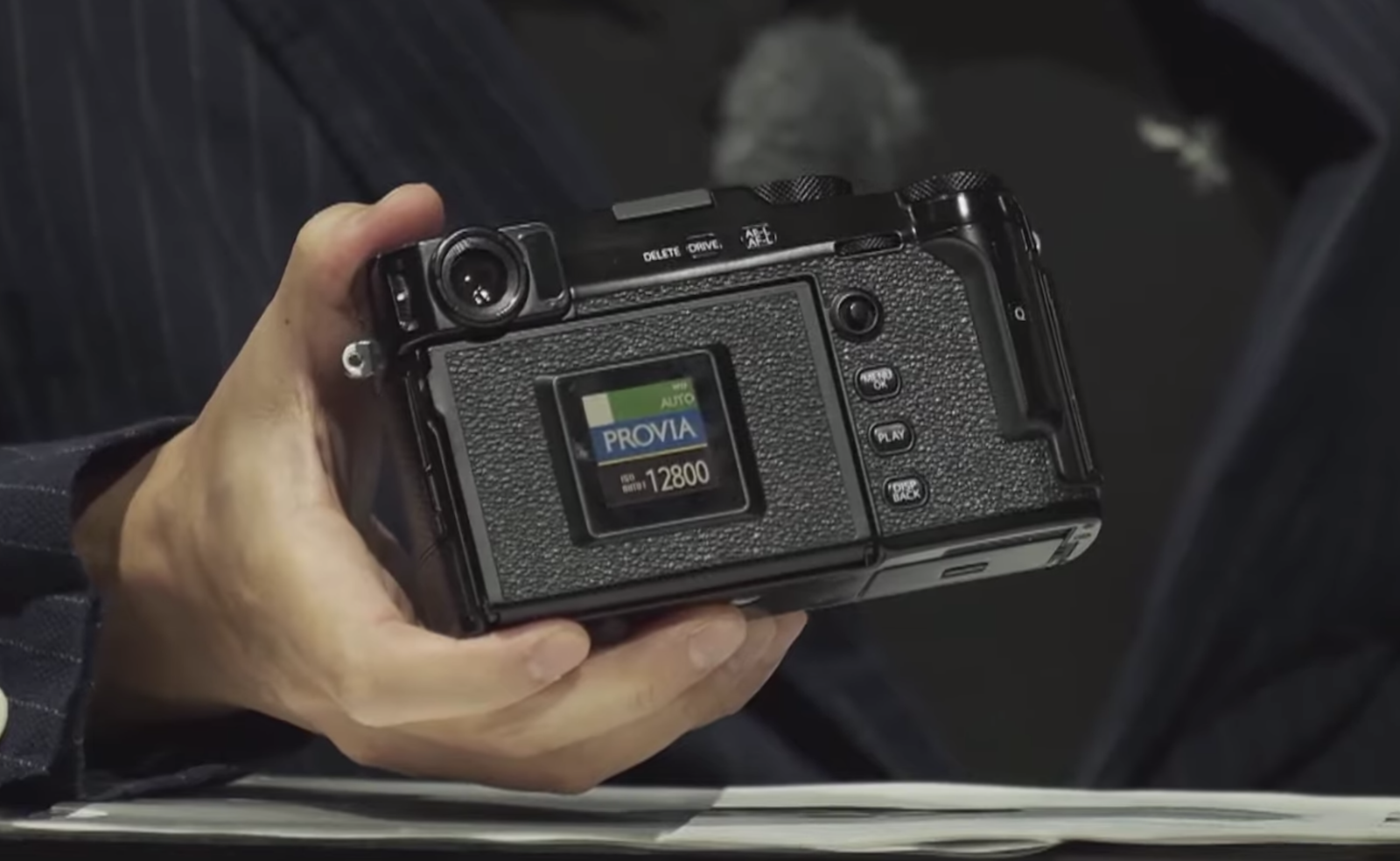 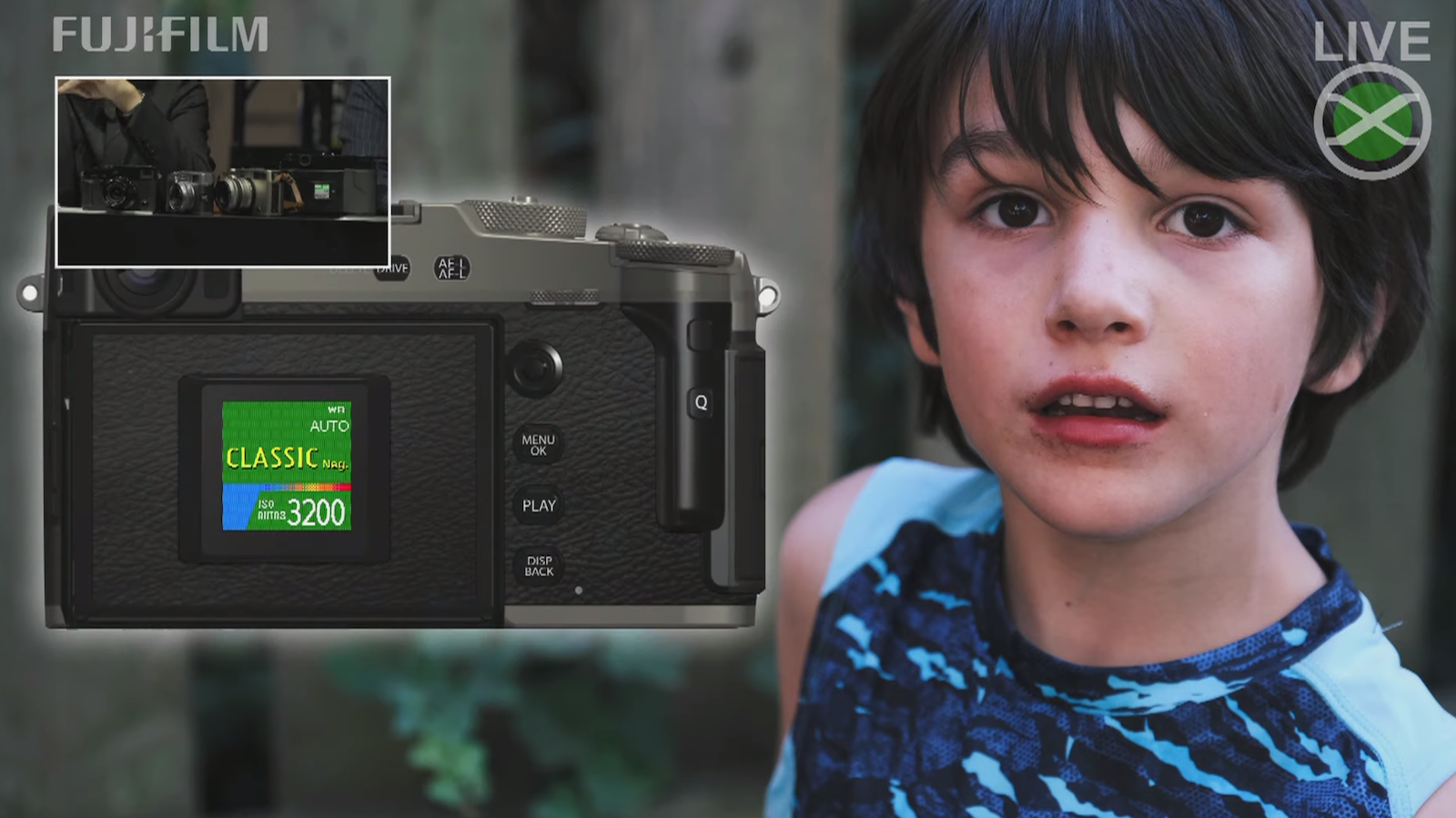 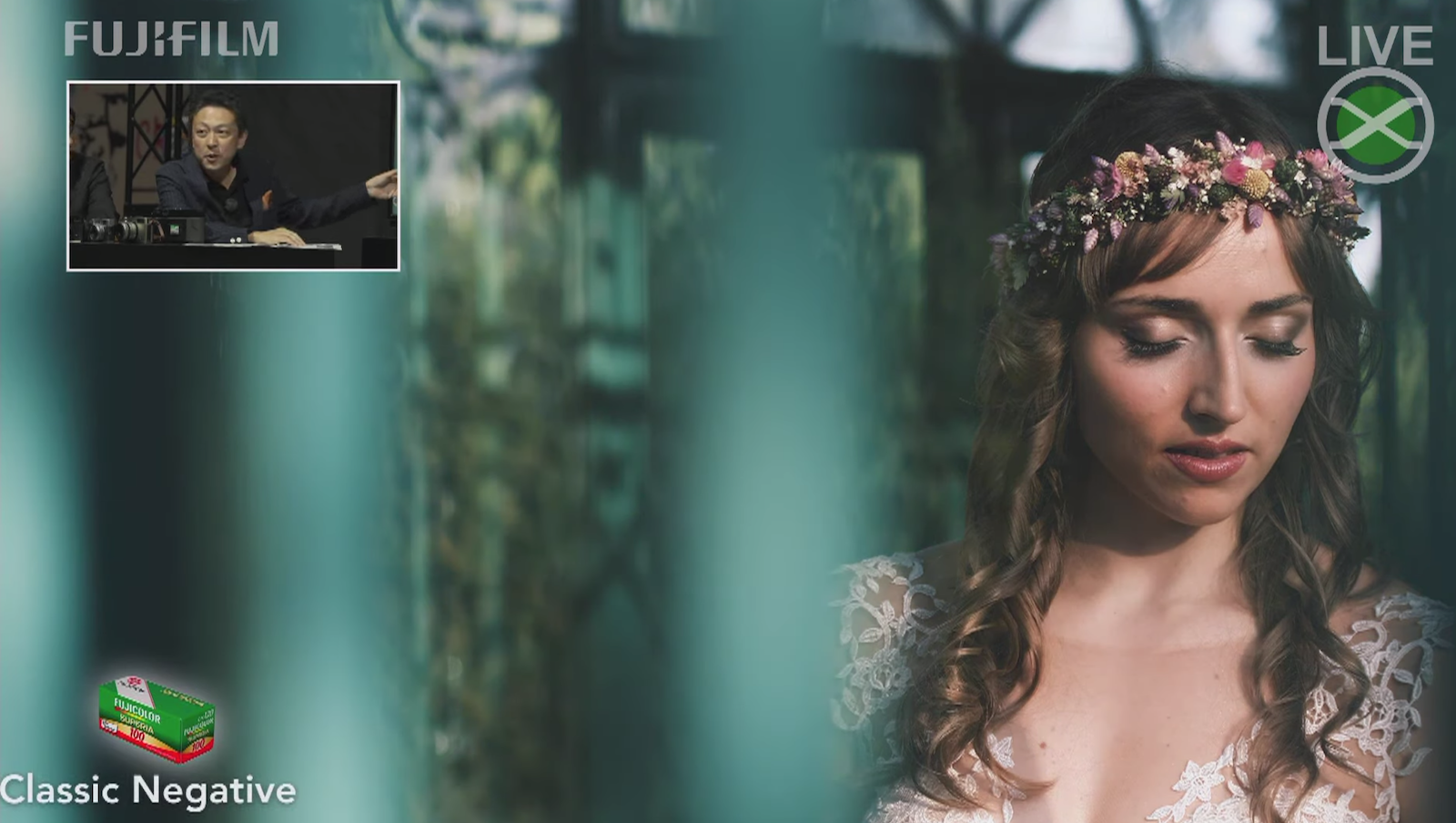 Check out the full live stream below, and skip to the 1:10:30 mark to jump straight to the X-Pro3 announcement and feature discussion:

That’s all we know so far about the Fujifilm X-Pro3, but it’s more than we expected to know. The camera will be officially announced on October 23rd, and there will be worldwide “Fujifest” events on the 24th for customers to try this camera out for themselves.

Check out the full livestream above to see it all for yourself, and let us know what you think of this unique little rangefinder in the comments.

Previous Ricoh Announces Development of New Pentax Flagship APS-C DSLR
Next A Portrait of the Back of Banksy’s Head Just Sold for $43,650 at Auction