Breaking News
Home / News / Godox to Retailers: We Did NOT Steal Profoto’s Designs

Godox to Retailers: We Did NOT Steal Profoto’s Designs

Profoto has been publicly accusing Godox of stealing its A1 round-head flash designs for the upcoming Godox V1, going as far as to send threatening letters to retailers warning them of legal trouble if they stock the V1. But Godox isn’t letting Profoto thwart its V1 launch.

While Godox hasn’t responded publicly to Profoto’s claims, the Chinese company has privately been sending out a confidential letter in an attempt to reassure its resellers.

Here’s the letter in full:

Here are some of Godox’s main points and claims:

“Please note that we have not been provided any letter directly from Profoto nor have we been provided any patent application that we could review,” Godox writes. “We are extremely disappointed that Profoto reached out to our dealers rather than deal directly with us.”

Godox is accusing Profoto of using “scare tactics” and “unfair competition” in an attempt to disrupt Godox’s business.

“It is our opinion that they have done so with the intent to cause harm to our dealer relationships,” Godox writes, noting that sellers and importers have a greater fear of risk than manufacturers and thus are more likely to comply with scary legal threats.

But Godox says that Profoto has simply been sending out vague legal threats without clearly detailing why they believe the Godox V1 infringes upon the Profoto A1’s design. 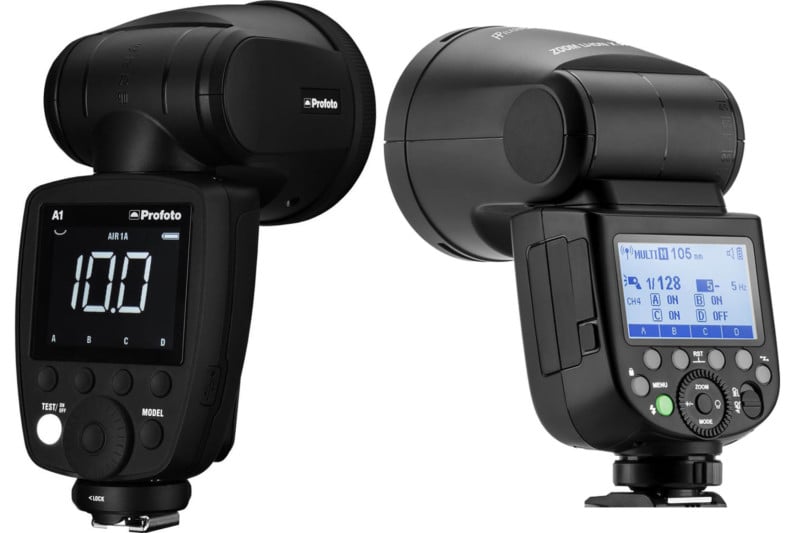 Profoto Doesn’t Have Firepower yet

Godox is reminding its partners that Profoto admittedly doesn’t have any issued patents in hand, only patent filings.

“Profoto has no legal rights until their patents issue,” Godox writes. “It may be that their patent applications are not entitled to any patent protection.”

What’s more, Godox itself has filed patents for the V1 that are currently pending.

Godox claims the V1 was developed independently and not based on any Profoto product.

The V1 Doesn’t Infringe Upon the A1’s Designs

Godox points out that circular flash heads have been around for years and were patented in China already in 2011. Other features shared by the V1 and A1, including the Fresnel lens, magnetic accessory mount, and integrated LED, are “the usual technical means in the field of photographic flash” and “not innovative,” Godox says.

If you’d like to see why Profoto is taking these measures to slow Godox down, look no further than the search volume charts of the two brands on Google Trends: In just past half decade, Godox has gone from a no-name Chinese “copycat” brand to a company that is offering comparable quality for a fraction of “big brand” prices. We’re hearing that at major retailers, Godox sales volume now outpaces Profoto’s by a significant margin.

And if Godox continues to grow its market share, it’ll be more and more difficult for Profoto to push its weight around and threaten resellers and importers as Zeiss did with Samyang in 2018 when it successfully got Samyang lenses pulled from shelves.

When it comes to the Profoto A1 and Godox V1, Profoto is charging $995 for its flash while Godox has priced its flash at just $259 (or about 1/4 the price). Such a striking price difference will definitely be something that photographers will be thinking hard about if considering a new round-head flash.

While B&H hasn’t listed the Godox V1 yet, Adorama now has it available for pre-order (branded as the Flashpoint Zoom Li-on X R2 TTL) for Canon, Nikon, Sony, Fuji, Pentax, and Panasonic/Olympus.