Canon DSLRs can trigger Canon Speedlites using the pop-up flash. If you try triggering those same Speedlites with a different camera’s flash, it doesn’t work, which means that there’s actual light-based communication going on between the DSLR and Speedlite. In this 9-minute video, Roger Nieh of Science’n’me explores the technology behind this communication.

“Have you ever wondered how Canon rebel cameras (600D+) wirelessly trigger speedlights with just its flash?” Nieh writes. “In this video, the pre-flash signal is analysed, decoded, and finally emulated using a microcontroller.”

Since DSLR flashes are too fast for ordinary high-speed cameras to study, Nieh uses an oscilloscope, a device that reads high-speed signals.

When Nieh fires his DSLR flash in the presence of the oscilloscope, it picks up two separate sequences of infrared light: the first one shows up in the signal graph with “lots of ups and downs” and the second occurs about 50ms after. 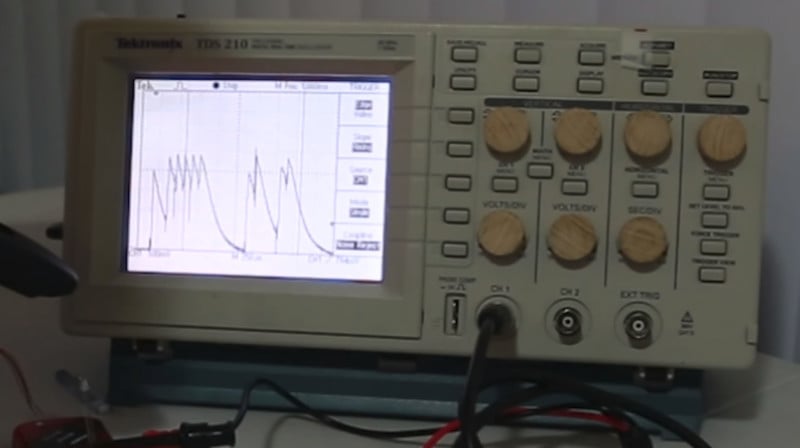 By adjusting the flash settings and analyzing the resulting “triggering light,” Nieh was able to decode the secret message that the DSLR passes to the Speedlite using light.

Nieh found that the lead pulse of light initiates the communications protocol. The duration of inactivity after that flash communicates the channel that’s being used. A “sync pulse” is next, followed by pulses that indicate intensity, followed by a 55ms delay, and finally concluding with the actual Speedlite flash.

Once Nieh figured out Canon’s light encoding, he used the knowledge to create his own working infrared light trigger that’s compatible with Canon Speedlite flashes.

If you’d like to grab Nieh’s triggering code for your own purposes, you can find it in the description of his YouTube video.