Instagram influencer and YouTube personality Vitaly Zdorovetskiy claims that he spent 5 days in an Egyptian jail and “saw horrible things” after he was caught climbing the Great Pyramid of Giza, a stunt that could have landed him in jail for a lot longer.

“No words can explain what I just went through the past 5 days. I was locked up in Egypt because I climbed the Pyramids Of Giza,” reads the caption. “I’ve been in Jail many times but this one was by far the very worst. I saw horrible things and I don’t wish this upon anybody. Was it worth it? F**K YEAH! I did it for a good cause and soon I’m going to share the whole video so the whole world can see 🔥”

He also posted several Instagram stories (which have since expired) that allegedly show him climbing the pyramid and being pursued by security. In one story a security guard is close behind; in another, he’s shown close to the very top of the pyramid alongside the caption “Fear Does Not Exist!” 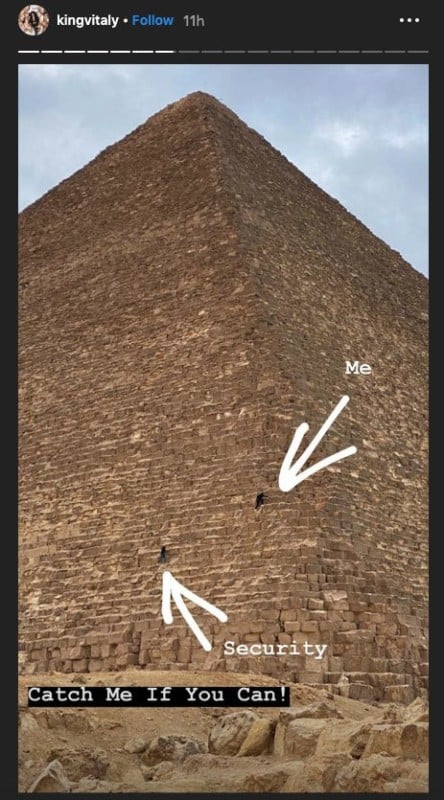 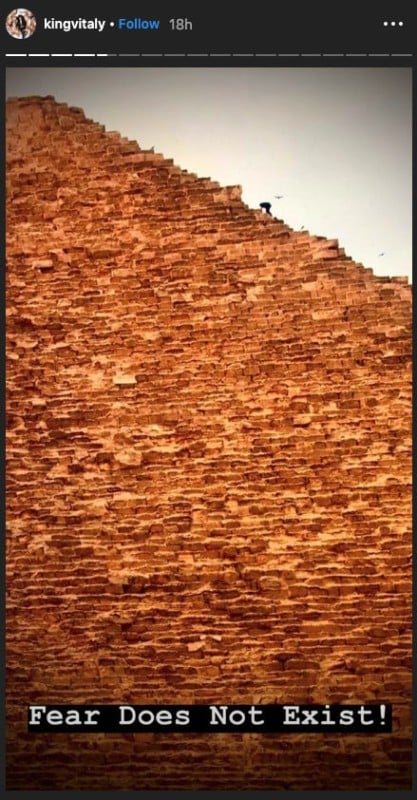 He’s since shared a couple of more stories along the same lines, one with the caption “Your Life Your Choice!” but has otherwise given no hint as to what the “good cause” he was climbing for actually is. A video about the climb and the cause is supposedly coming sometime today or tomorrow on his YouTube channel, which boasts over 10 million subscribers. 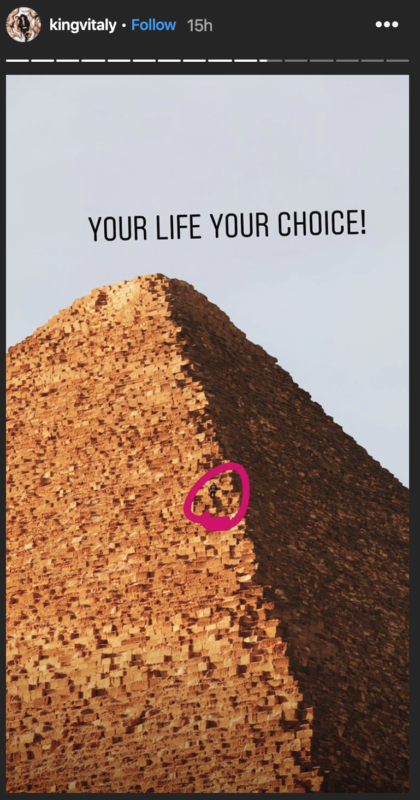 Egypt’s parliament recently recently imposed harsher penalties for climbing the pyramids, saying that anybody who is found climbing “any antiquity” without the proper permit will face “at least one month’s imprisonment and/or a fine of not less than EGP 10,000 ($630.57) and not more than EGP 100,000 ($6,305.69)”

By that yardstick, Zdorovetskiy got off easy with only 5 days. His girlfriend and fellow influencer Kinsey Wolanski got off even easier a month ago after pulling off the same stunt.

A video posted to Wolanski and Zdorovetskiy’s Instagram accounts follows the entire encounter, which ends with Wolanski being released by authorities after some money allegedly changed hands.

There didn’t seem to be any point to Wolanski’s climb, and while we’re still waiting to find out what Zdorovetskiy’s “cause” was, it’s important to note that none of this is out of character for the influencer. He was arrested in 2014, 2016, and 2017 for running onto the field at various major sporting events, usually in order to promote his x-rated website Vitaly Uncensored.

Egyptian authorities have not said if there will be any further consequences for Zdorovetskiy, but it seems likely he’ll be banned from entering the country ever again. This is what happened to 18-year-old German tourist Andrej Ciesielski in 2016 after a video of his Great Pyramid climb went viral.