Macro Video of Bioluminescent Shrimp Shot with a Sony a7 III

Sometimes the world blows you away. It was like that for us when we first started shooting sea fireflies on rock formations back in 2016. The visual power of these creature lighting up the shoreline was just stunning. It made us want to learn more about these creatures and think about innovative ways of shooting them.

Light at the End of the Tunnel?

We were busy with other projects in the summer of 2017. In 2018, Okayama, the region we live in, was hit by large floods, a dangerous heat wave and a series of devastating typhoons that kept us away from the shoreline. So, this summer we decided to return to the old haunts and seek out these quirky creatures once again.

Before reading on, let’s get a little better acquainted with these mysterious lifeforms. Sea-fireflies (vargula hilgendorfii) are a type of ostracod. They are tiny, flat, seed-like creatures that live in sand in shallows waters. They range in size from 1-3mm.

They are nocturnal scavengers that use their light displays for defense and in courtship. They can only be found in Japan, the Gulf of Mexico, the Californian Coast and the Caribbean Sea.

In Japan, they were dried and ground into a bioluminescent powder that provided portable light sources during wartime. In the Caribbean, they are known as ‘blue tears’ due to the light streams they leave in the night ocean. Wherever you find them, they are a source of wonder and delight in the summer nights. This summer we went out to see if we could locate a few of these summer sea sprites. Instead of just photographs, we wondered if it would be possible to do something new.

But, as you know, the weather has been strange this year. In Japan, August has been unseasonably cool and wet. The first few times we went to the beach there were hardly any sea fireflies to be found. We thought we might have to wait another year. We had almost given up.

Another typhoon came and passed. We went out close to the full moon when the tide was high and suddenly, they had come back. It was comforting to see them in great numbers again. During that car ride home, we discussed options for something and decided on trying for a macro series but also agreed to try filming them too. 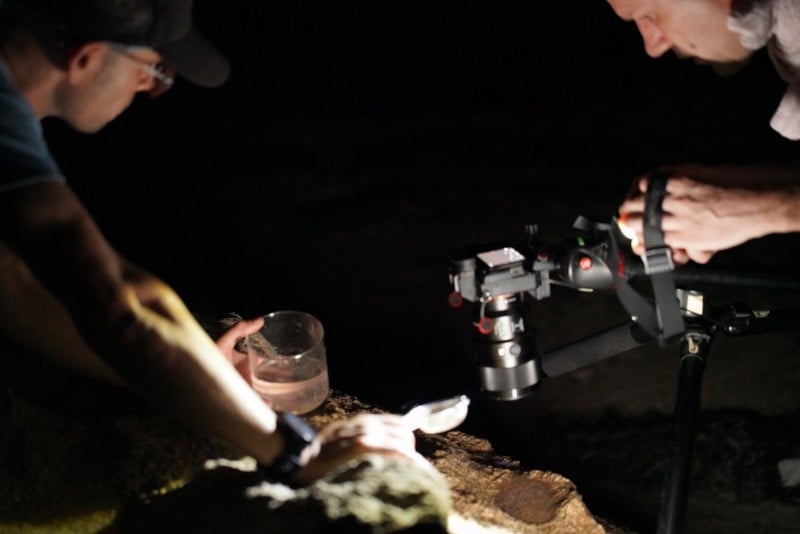 Two nights later we were back on the beach. Our set up was minimal: the Sony a7 III, the Sony 90mm macro lens, a tripod and some small video lights.

It took quite a bit of experimentation to get a flat plane of focus working in the rock pools. These creatures are only 1-3mm in length and buzz around like crazy. The macro lens meant we were working with a razor-thin DOF and only had a minimal area visible to the camera.

After a short while, we started to think that capturing the exact moment they release their bio-luminescence in this tiny space would be impossible and beyond the capabilities of the kit we had. Then suddenly, it happened. A shot of illuminated blue streaked across the frame. It felt like the first time you see a shooting star.

“Was that for real?”

It was, and not long after we saw it again – the bioluminescent meteor shower had begun. We excitedly spent the next few hours shooting the magic igniting in front of the lens.

When we got back to the studio and started looking at the footage we were amazed at the image quality.

Putting the Video Together

We primarily shot this in 4k, but shooting with the Sony gave us the option to shoot some slow-motion sequences at slower speeds like 120p or 60p. The shutter speed needed for 120p was too fast for the dark conditions so we shot some footage at 60p. When we put the movie together we were working with an HD sequence. As a few clips in this film are 4k in an HD frame, the sea fireflies may appear a little larger than their actual size.

In the end, we never utilized the 60p functionality to make slow-motion sequences, so everything you see is in real-time. Most clips are shot at ISO 3200, but some 60p clips were at ISO 6400. We used picture profile PP2 which is our go-to profile for shooting at night as it does a great job handling noise. We were still very impressed at the lack of noise and low light performance of this setup.

Over the course of this project, we had the opportunity to observe these lifeforms up close.

It’s impossible not to be captivated by these little creatures. The moving images revealed sea fireflies’ character and effervescence and have changed the way we feel about them. We felt a connection. And we just wanted to share what we had found. We hope these images captivate you too and brighten your day, or night, a little.

Previous Portraits of Honor: Photographing the Last of the WWII Veterans
Next LaCie Unveils Three New Rugged SSDs, Including One with a Built-in SD Slot