A wedding photographer has lost an SD card case full of photos she shot at a wedding, and her appeal for the public to help find the lost memory cards is making headlines in Colorado.

Contact7 reports that photographer Lenzi Holmes was hired to photograph the wedding of her best friend Kacie and her fiance Troy Sanford in Berthoud, Colorado, last Friday. All of the photos she shot were recorded on SD cards that were then placed into an SD card carrying case (the case in the photo above).

The following day, after checking out of their hotel and enjoying a day of sightseeing in the mountains, Holmes and her husband arrived at Denver International Airport to fly home to Texas. It was at the airport that Holmes discovered that the SD case was missing.

The photographer immediately got a cab and began retracing her steps, searching everywhere from a gas station trash can to the hotel where she stayed. When she couldn’t find the case anywhere, Holmes turned to her Facebook page and the local media for help. 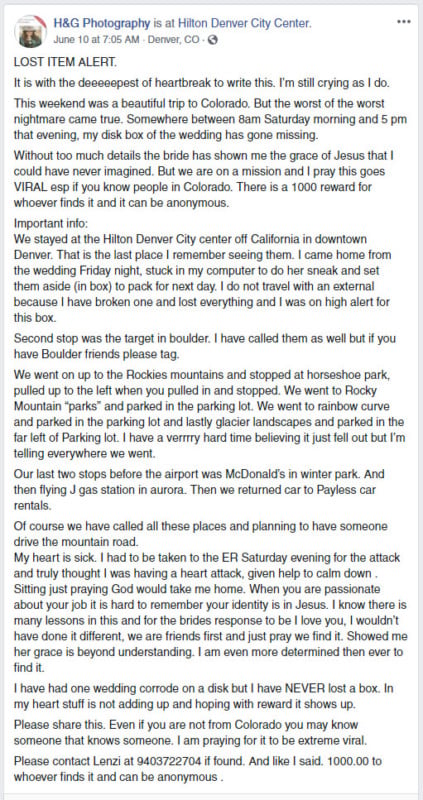 In her Facebook post pleading for help, Holmes details all the locations she visited between 8am and 5pm that Saturday.

“This weekend was a beautiful trip to Colorado,” Holmes writes. “But the worst of the worst nightmare came true. […] [W]e are on a mission and I pray this goes VIRAL esp if you know people in Colorado.”

In a separate post, Holmes says she’s disappointed in the Hilton hotel she stayed at for not helping enough — the hotel (understandably) refused to immediately search the room as new guests had already checked in. 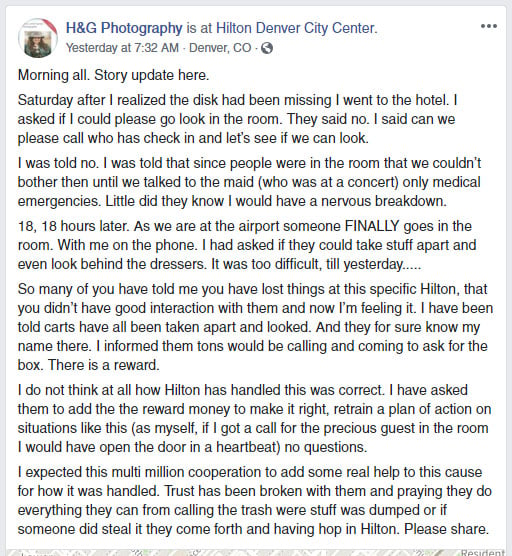 Holmes is now offering a $1,500 reward (up from the original $1,000) to anyone who can help recover the wedding photos.

After learning of her lost wedding photos, Kacie has been incredibly gracious toward her best friend.

“I told her I loved her,” she tells Contact7. “I love her and who she is and I wouldn’t want anyone else there on my day. We have one beautiful shot that we will keep forever, and if we cherish that one, we cherish that one… and it’s OK.”

Holmes has also received a remarkable amount of help from generous strangers in Colorado.

CBS4 reports that a man named Carter Lemon heard about Holmes’ plight and retraced her steps this week, even driving into Rocky Mountain National Park to look in the parking lot and spots Holmes visited.

Despite the story going viral and the assistance of strangers, Holmes still hasn’t recovered the previous wedding photos.