Photographer Shares the Story Behind this Incredible Astrolandscape Photo

Two days ago, photographer Paul Schmit captured what he’s calling “the most difficult and technical astrolandscape shot I’ve ever planned and executed.” It’s an incredible shot, showing the ISS transiting the sunset in front of some picturesque radio towers atop a mountain peak. This photo was weeks in the making, but Schmit tells PetaPixel he almost missed it.

Schmit originally shared the story behind this shot in a Facebook post, where he did a good job of summarizing why this photograph is so special.

“For over a year, I’ve been waiting for an opportunity to capture the International Space Station moving across the face of the sun as it rises over a landscape,” writes Paul on Facebook. “This turns out to be an immensely challenging task, requiring that the ISS cross in front of the sun far enough from my vantage point so that its apparent elevation is relatively low in the sky (then allowing for a landscape element); plus, the ISS shadow can’t just be low in the sky, it also must pass over a suitable, well-positioned landscape element; plus, there must be a way to get to the exact location that will afford a simultaneous view of sunrise over that landscape element (~2 minute event) and the ISS transit (~1 second event).” 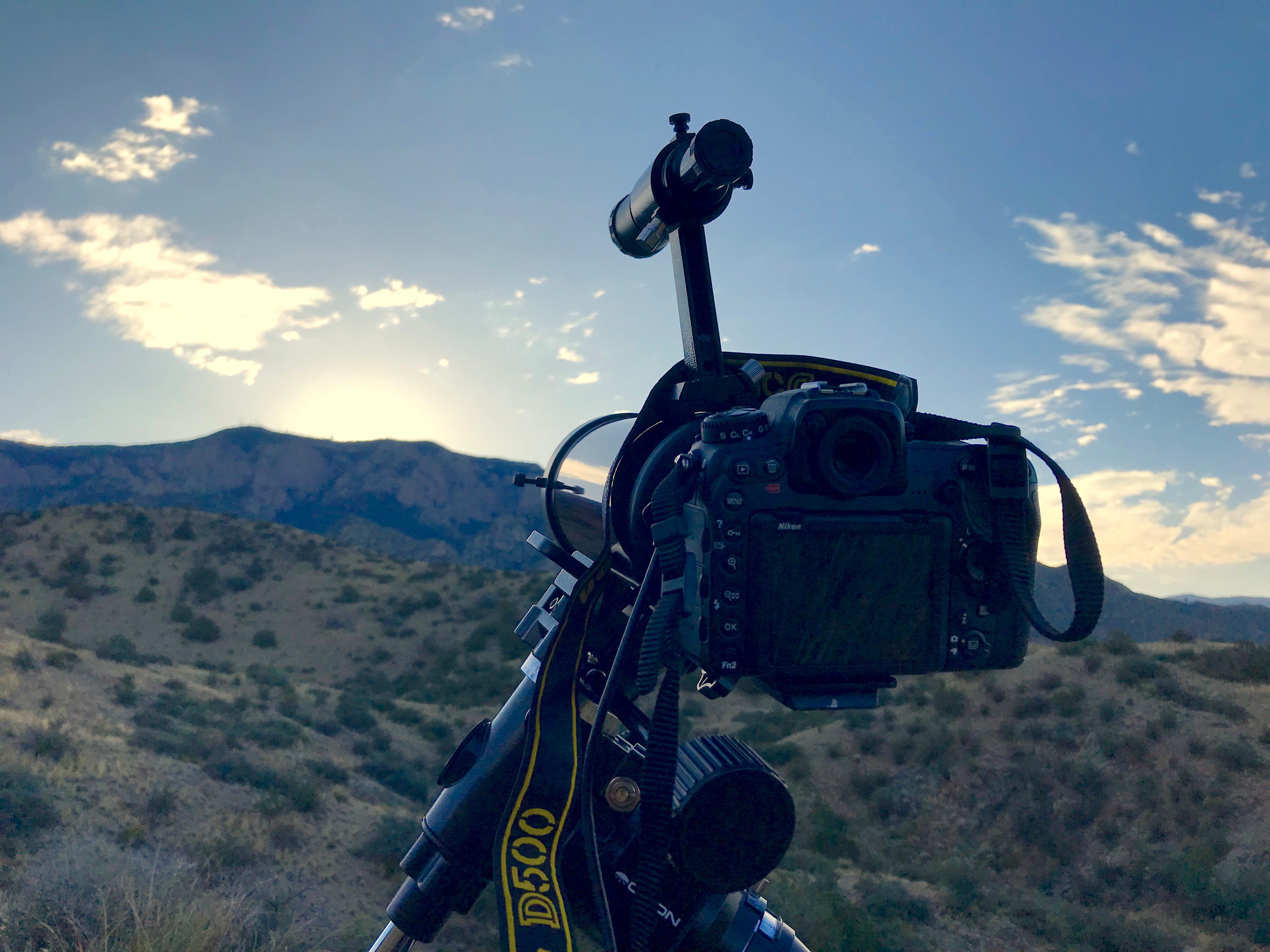 We spoke with Paul this morning, and it’s incredible just how difficult this shot was to capture, and how nearly he missed it. When you’re planning a shot this precise, the smallest deviation in scouting and planning software like The Photographer’s Ephemeris and PlanIt! can lead to a missed shot.

“Tiny errors in perspective (~0.1 degrees) caused by inaccuracies in the topographical mapping software could make or break a shot,” he explains. A dry run the day before revealed that this was, indeed the case. “Very small errors in the software’s landscape rendering led to the sun rising ~1 minute later than expected, signifying a mere 0.2-degree error in simulated perspective, but enough of an error that I would have missed the transit while waiting for the sun to rise.”

He tried to compensate, but with just 2 minutes until the transit and sun’s disk already starting to rise, he had to reposition or miss the shot.

“I quickly slid my telescope/camera off its sturdy mount, tucked it under my arm, and ran 40 feet down the hillside, chasing the shadow of the mountain as it crept downhill,” says Schmit. “With only 45 seconds to go, my dad shouting out the times to me, I laid on my back, propped the telescope on my knees, and frantically scanned back and forth trying to find the sun in my LCD screen.”

Picture it: he’s lying down on his back with the scope propped on his knees, hand-holding his Nikon D500 and a 2000mm FF-equivalent lens, his father/trusty photography partner Gary shouting out reminders as the seconds tick away… and it worked! He fired off 10 shots just as the ISS began its 1.4-second transit across the sun. To get a sense or just how close he was to missing the shot entirely, Schmit put together this half-speed GIF of all ten shots aligned in post:

Here it is at full speed without the frames aligned. The GIF is a bit dizzying, but it really captures the frantic feeling of the moment:

Two minutes later, the sun had already disappeared behind a bank of clouds.

“Sure, there is some minute pixel-level blurring due to handholding a telescope at ~2000mm FF-equivalent focal length after sprinting downhill; and yes, I risked missing the event completely had the sun not suddenly appeared on my LCD screen at just the right moment,” says Schmit in closing. “But, with that in mind, I think the final image is much more dramatic with individual trees and branches appearing below the radio towers, captured from over 3 miles away by a photographer fearing he just ruined countless hours of preparation and missed the shot.”

We totally agree. The photo, the planning, the near-miss, it makes for one of the most exciting landscape photo stories we’ve heard. And the final shot is that much richer for it.

Not that Paul is a stranger to capturing amazing images. Here are a few more ISS transits, astrophotographs, and some cool time blended landscape images he sent our way this morning: 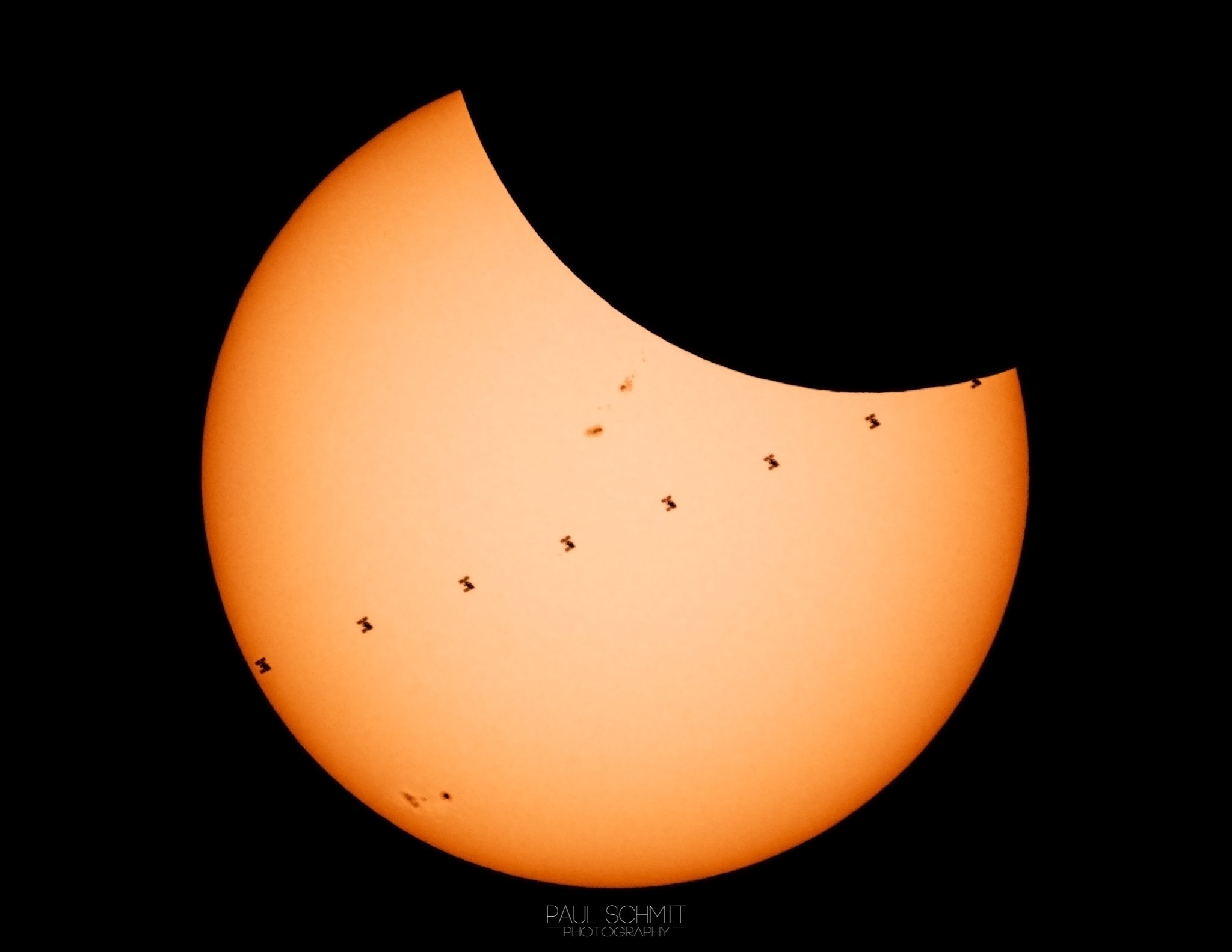 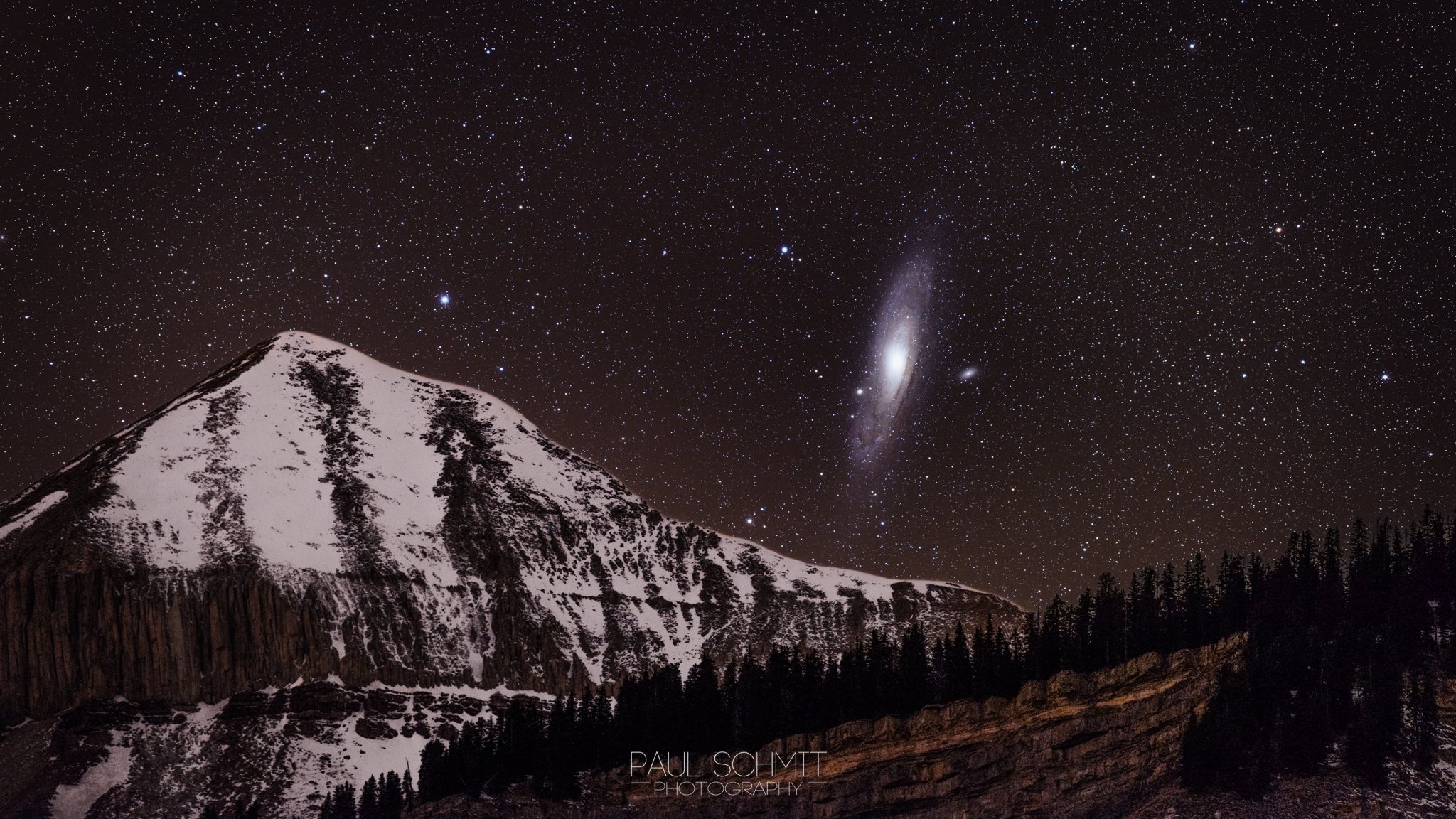 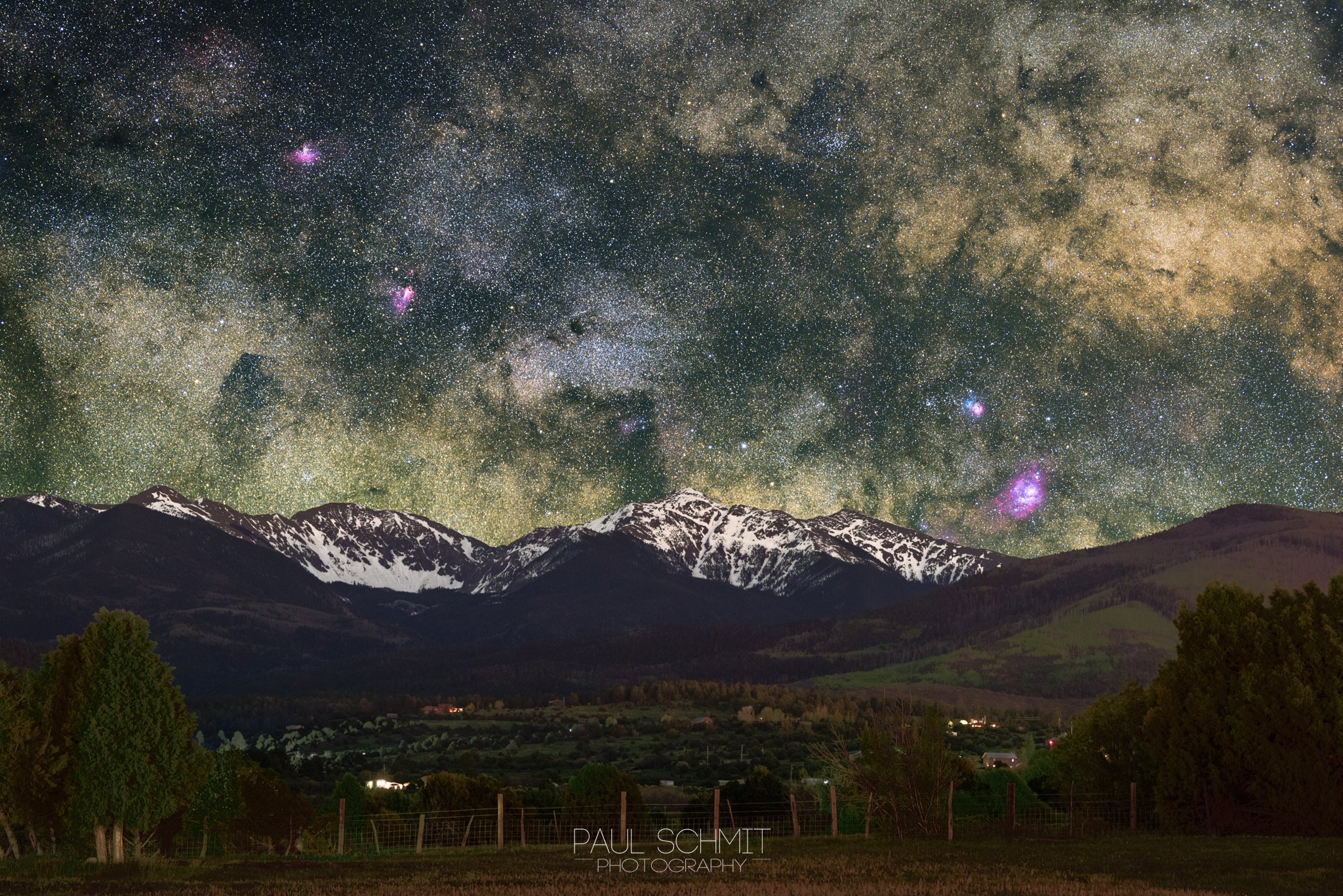 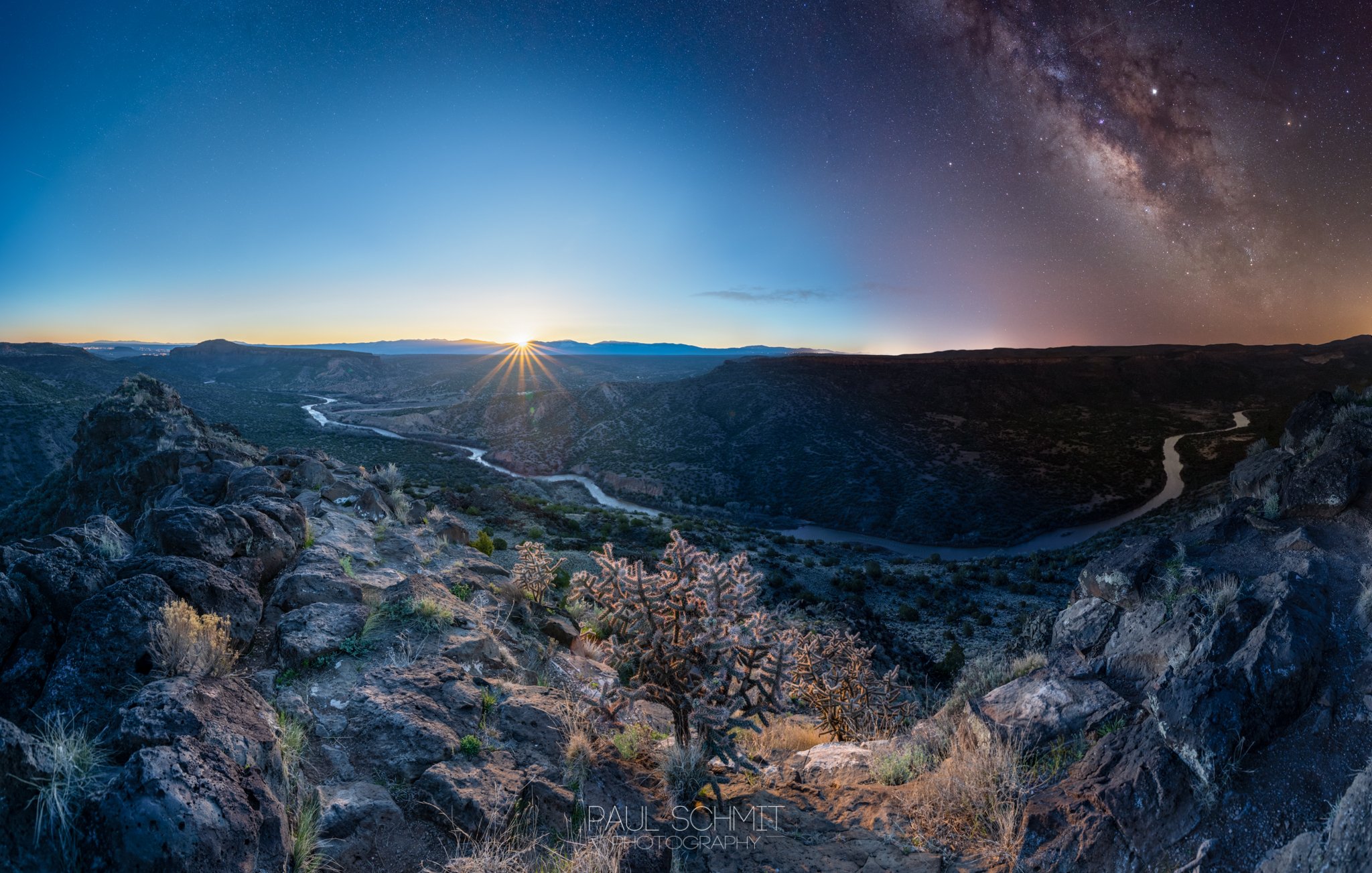 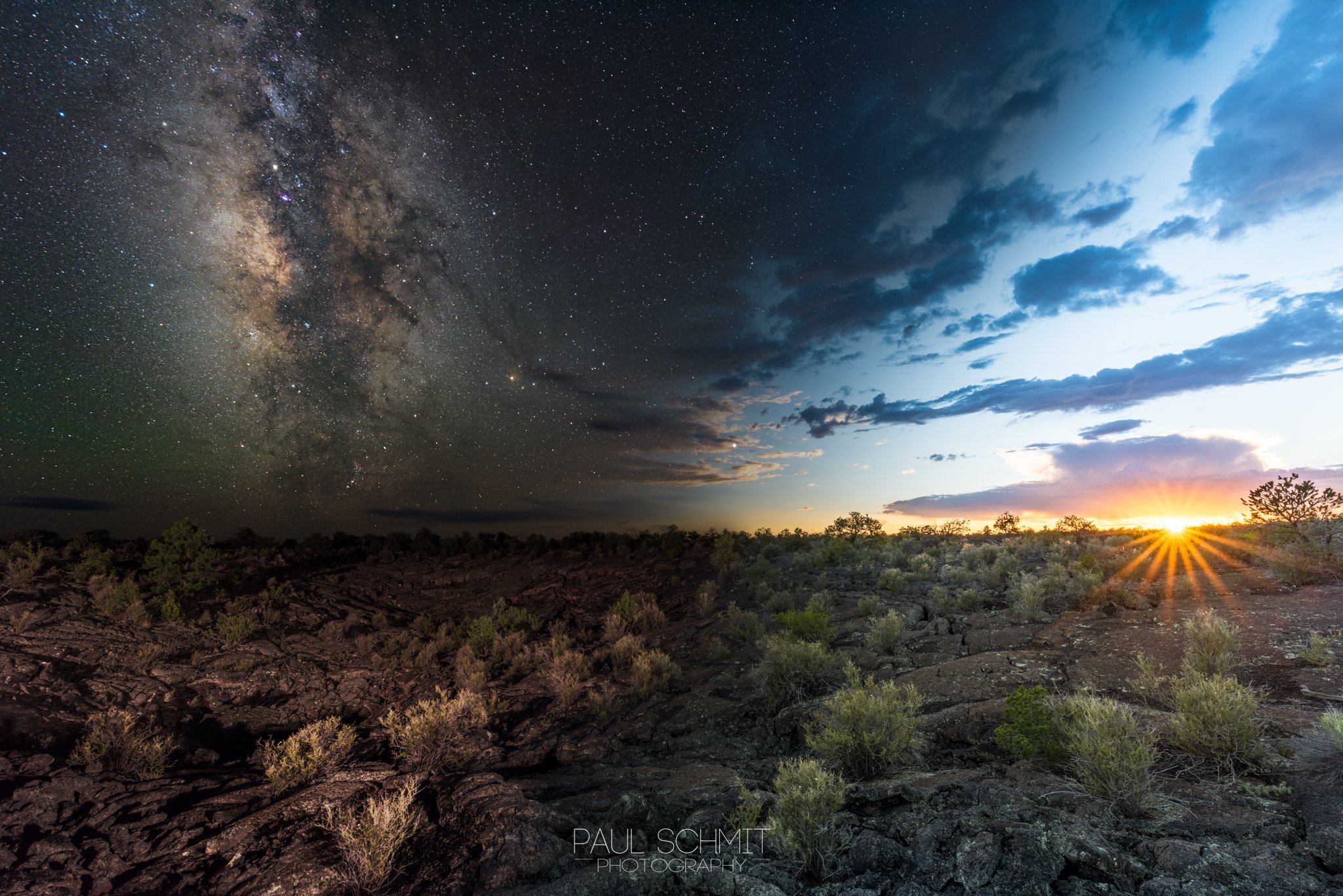 We hope you enjoyed this amazing photo story as much as we enjoyed telling it. To see more from Paul, be sure to visit his website or give him a follow on Instagram.

Credits: All photographs and gifs by Paul Schmit and used with permission.