Putting a Man ‘on’ the Moon: A Photo for Apollo 11’s 50th Anniversary

I’ve been fascinated with the idea of incorporating the moon into photos whenever possible. And so, with the 50th anniversary of Apollo 11’s moon landing on July 20th, I was excited by the possibility to shoot something special for the occasion: Putting a man “on” the moon.

The man here is Ty Johnson, a paramotor pilot, in Cedar Rapids, Iowa. As NASA will tell you, getting a man to the moon is harder than it looks. This is how we did it.

I first spotted Ty’s paramotor—a powered-parachute—in the air when I was shooting Iowa’s amazing, magical fireflies. I chased him down as he landed with a simple request: let me shoot you in flight. He agreed, and in a few days we got to work.

I wanted two sets of shots: him passing in front of the moon, which would be shot from the ground, and a set from the air, with me following him with a drone camera.

As with NASA, we had our own set of restrictions facing us, and safety was a priority. Paramotors, because they are so light (a two stroke engine, a prop, a parachute and a chair for the pilot) have wind restrictions in order to fly safely. We had to take these into consideration just for Ty to take off, not to mention getting him lined up in front of the moon. The wind was our enemy. And for the actual moon shot, so were the clouds.

We tried first on July 11th, the moon a Waxing Gibbous at 73.9% full. We coordinated on the ground with a planned series of shots and, after he took off, I called him on his cell to provide direction. He could hear me through ear buds but the noise of the propeller and motor washed out much of his replies. It was one way communication.

Paramotor pilots face numerous flight rules. The big one we were dealing with: no flying over congested areas. With a subdivision to south, we were boxed in, making lining up with the moon difficult in the short amount of time we had before darkness.

Another FAA paramotor flight rule: no flying 30 minutes after sunset.

Time was ticking and the winds were stronger at altitude. Here’s a shot from our first attempt on July 11th, the moon a Waxing Gibbous at 73.9% full, below:

I got him going over the moon, but that was it. It was best we could hope for that night. It was time to land.

The next few nights were a no-go. Winds were just too high to fly. Then, on July 14th at 8:17pm, with the moon a waxing gibbous at 97.1% full, Ty texted me: the winds had finally died down a bit. Was it too late to shoot?

The seconds were ticking by, the sun was setting and we had to get to the field. He then had to setup his aircraft and get into position. And had the winds even died down enough to take off?

Ty put his machine together and put on the propeller as we discussed the shot and flight, and then I drove to my shooting position. The moon was lower on the horizon and further east than on July 11th, which would allow him to fly over fields, avoiding the subdivision to the south and giving him more maneuvering room.

I put the camera on a tripod this time and auto-focused in on the moon rather than following him and shooting by hand like I had on the 11th. I then switched to manual focus. It was getting darker by the moment—I would still have to change exposure and ISO settings by the time he got into position.

Ty laid his wing out on the ground. The winds were unsteady. Would he be able to take off?

I watched from a short distance. A first attempt and a gust took the parachute in the wrong direction. He re-positioned again into the wind. The chute went up, caught the wind. A short run and he was in the air.

I let him climb and then made the call.

I gave directions by phone: more altitude… head east… southeast, away from me, toward the moon.

The winds were coming out of the south and he was headed south southwest toward the moon, giving him a stability that he didn’t have a few days earlier. I needed him further away from my camera, so he and his aircraft were smaller than the moon and would fit inside it.

He was on track. A finger’s length away. Closer… 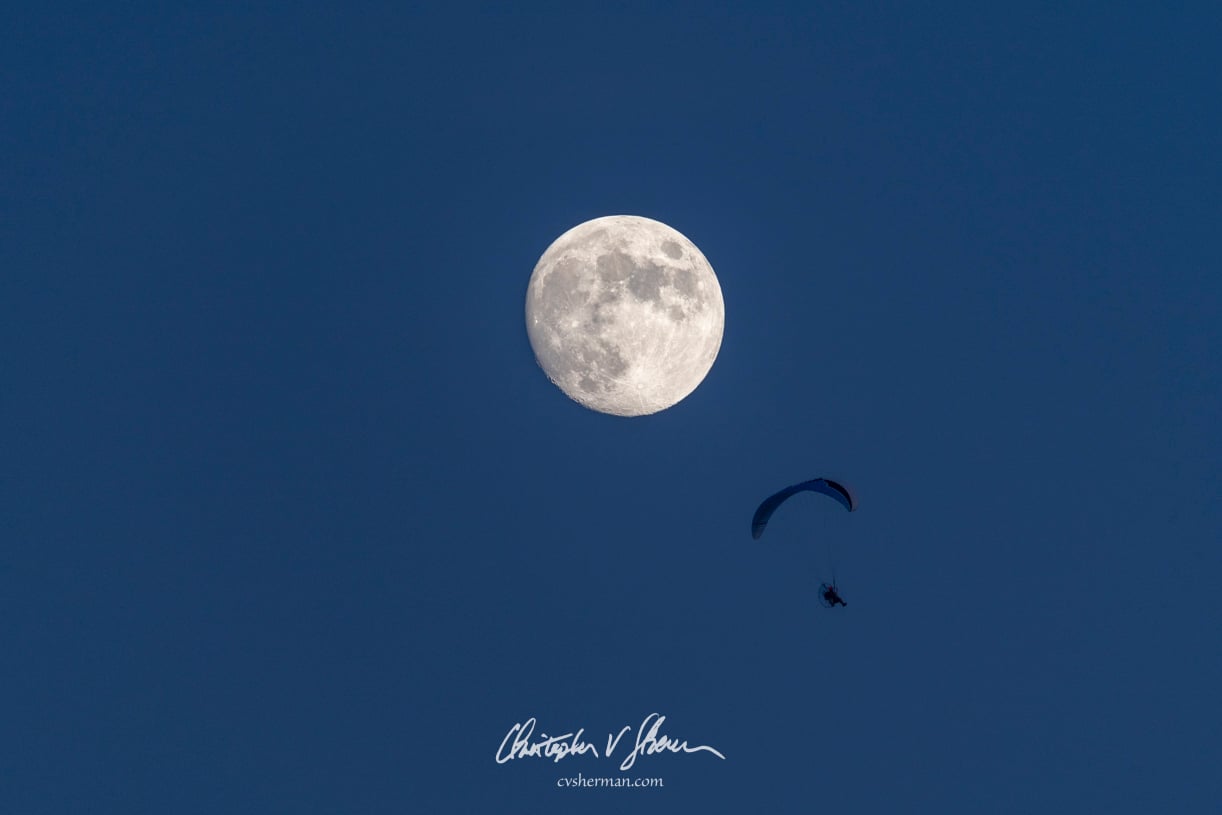 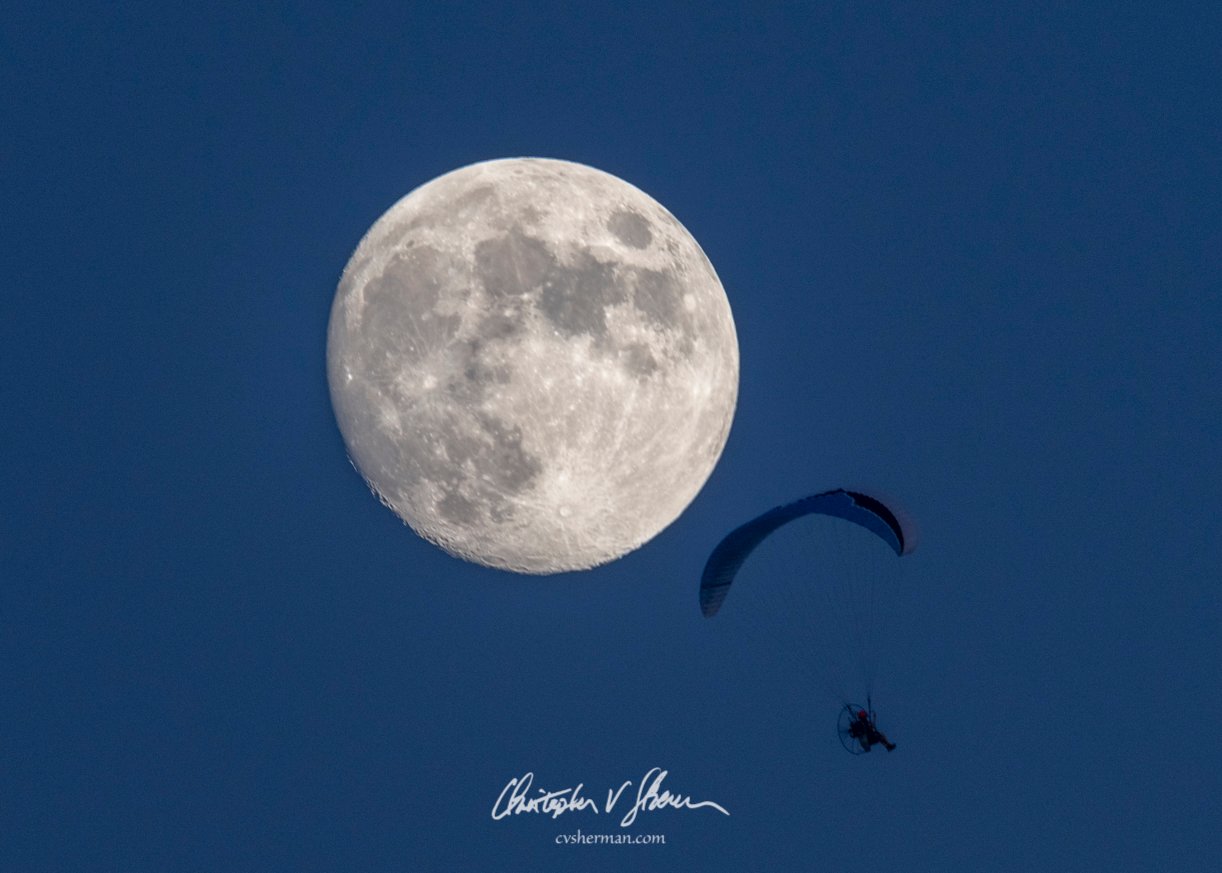 Almost. Not too much altitude. Ease off on the throttle a little. Don’t over shoot it. Further east.

That was it. The parachute’s in the moon. Keep going. 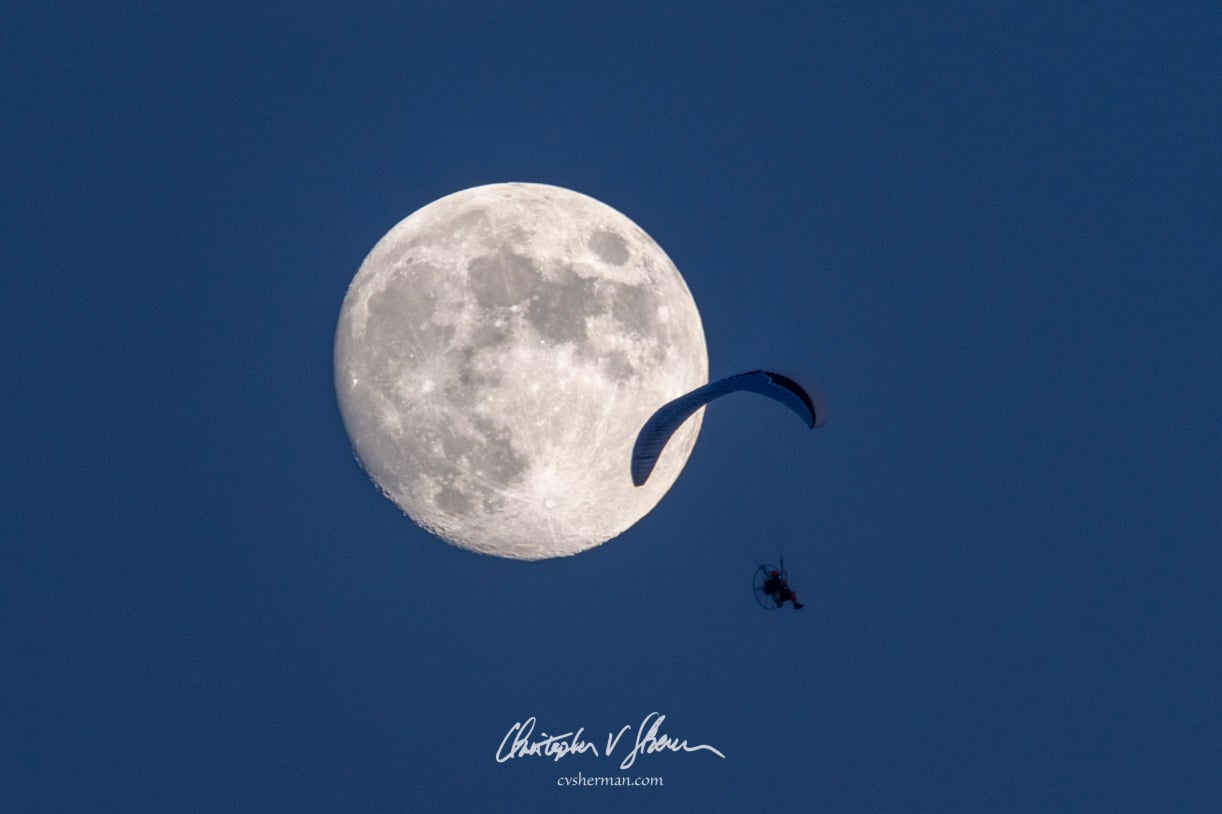 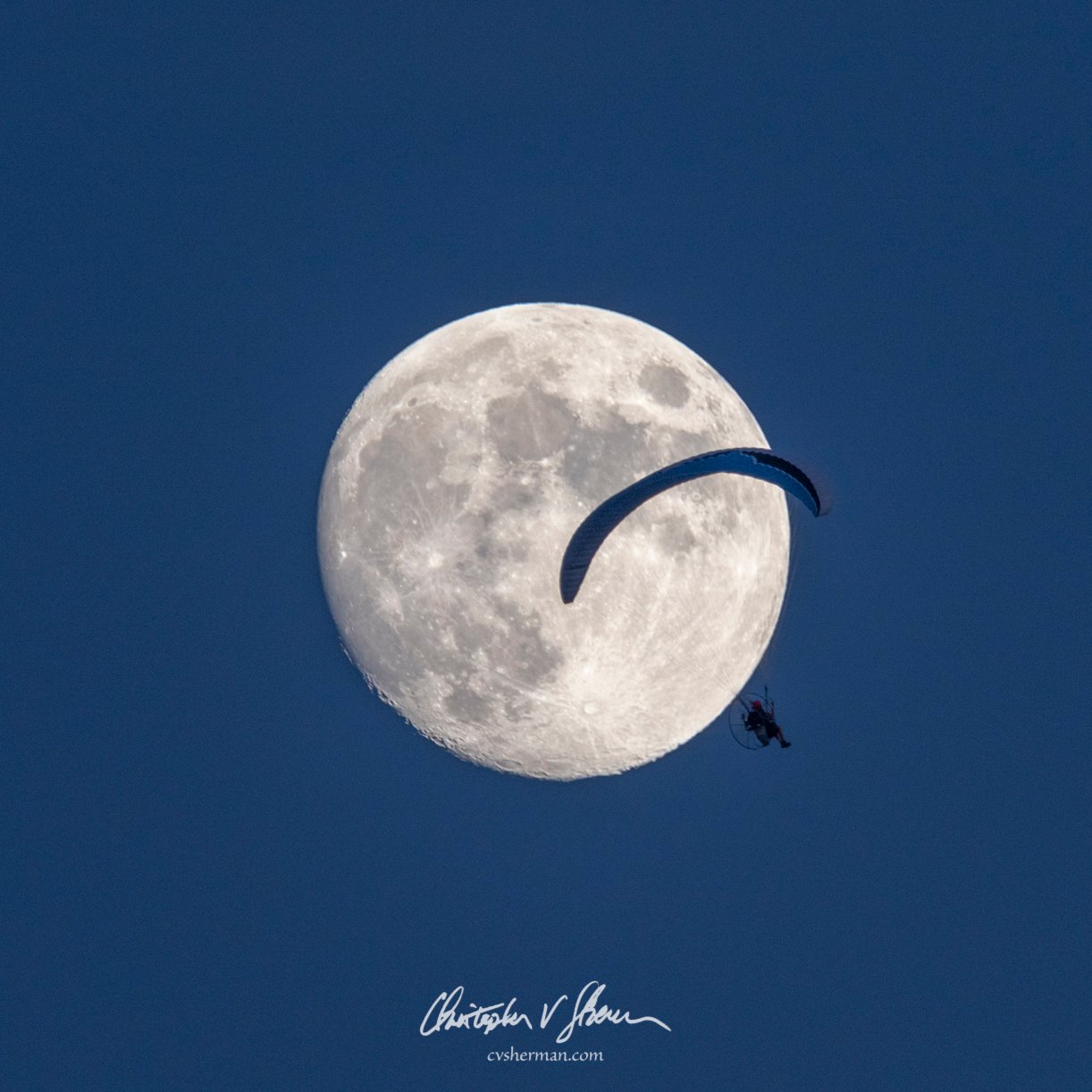 Later we estimated he was about 1.5km from my shooting spot. Below is an estimate of our positions using The Photographer’s Ephemeris web app (mine the red pin, his the grey pin).

I clicked away as the light faded. Ty could hear the camera shutter as I guided him across the moon.

I checked the shots and he swung back across the moon a second time. Some shots were in focus, some were not. But we still had time.

We got it for sure this time: 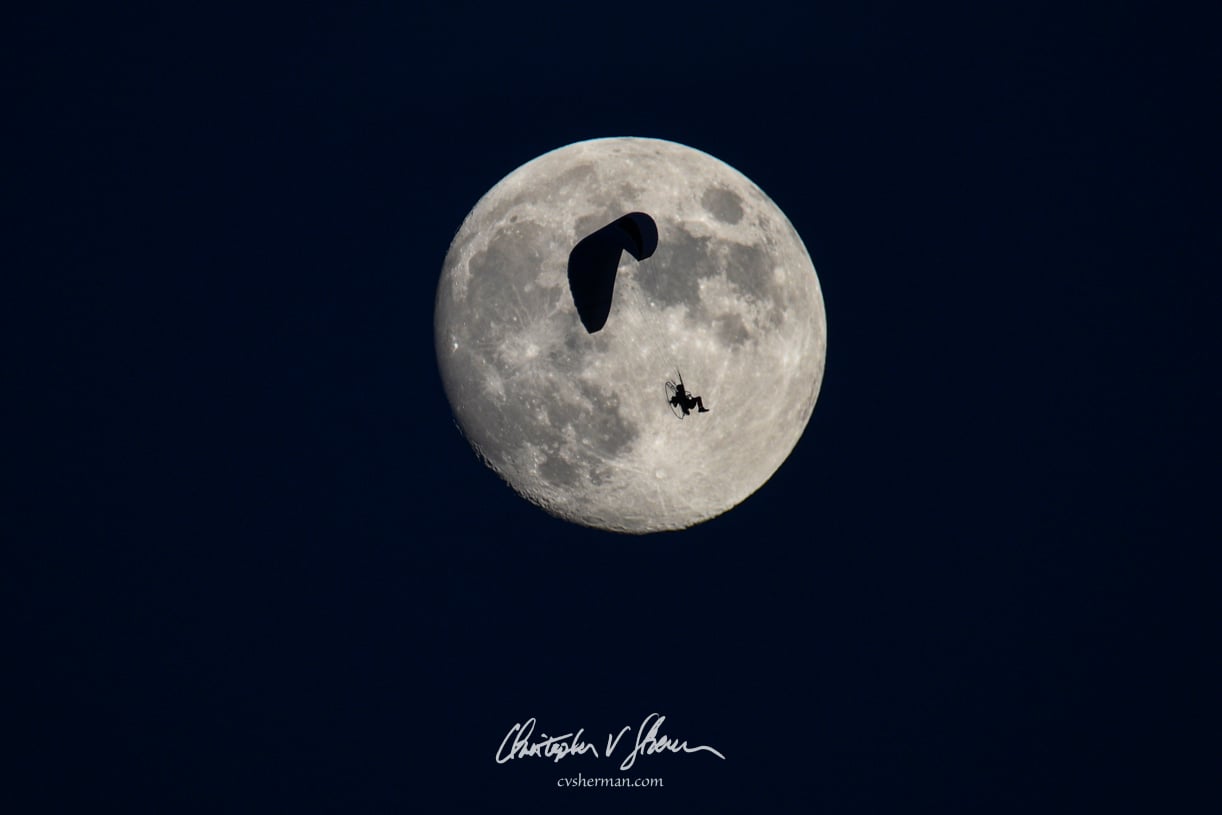 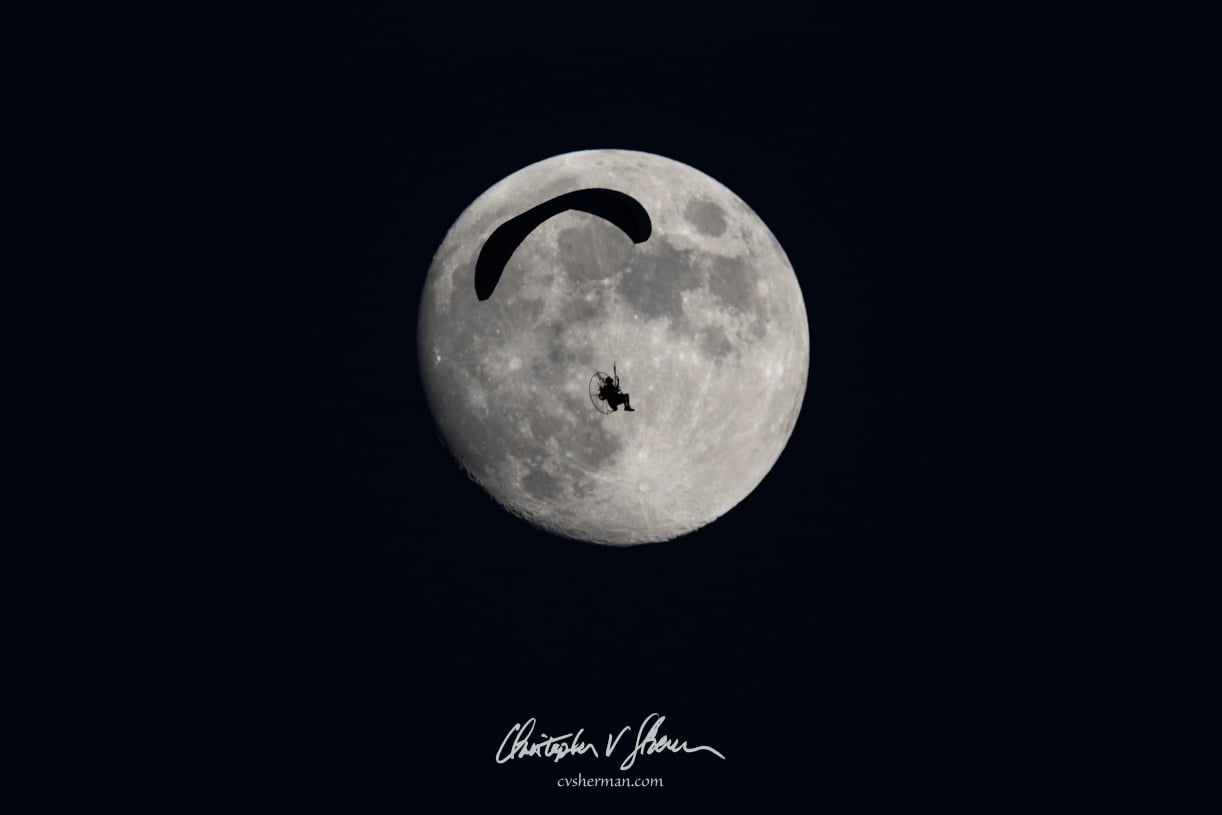 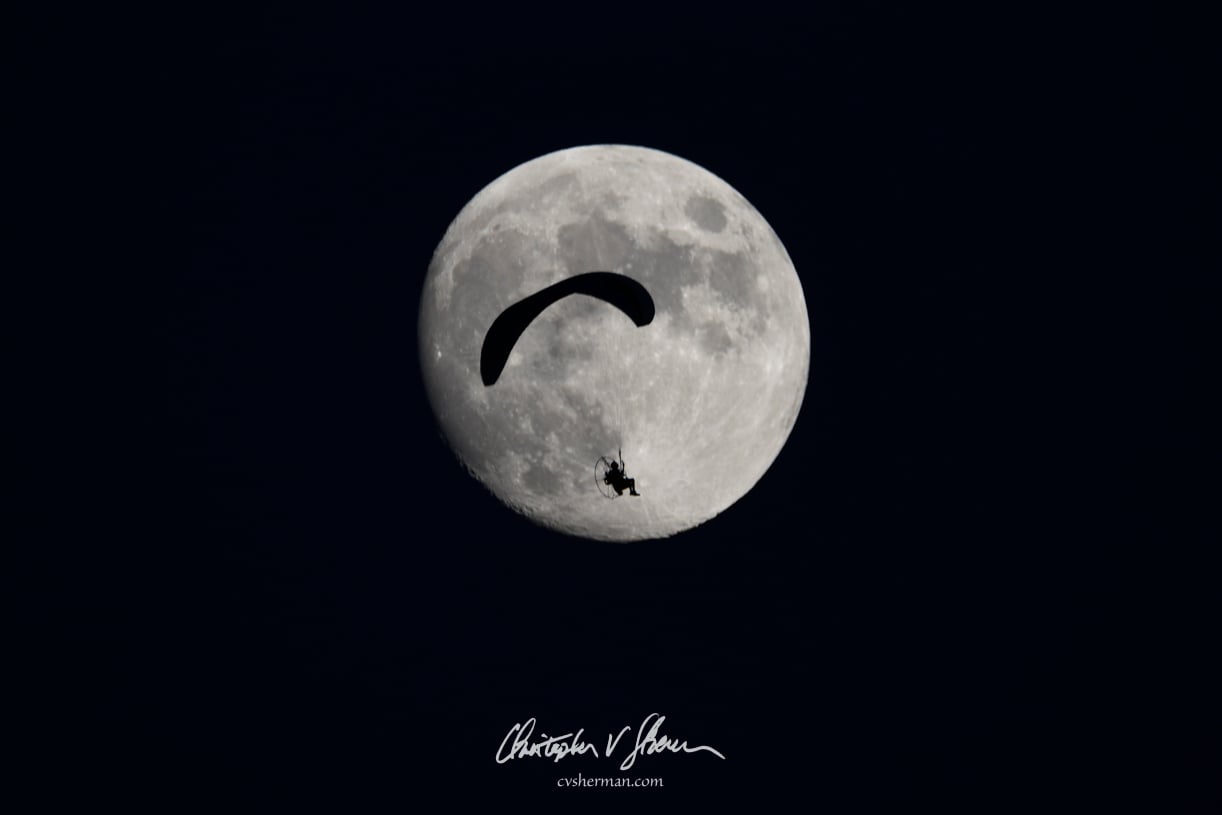 The sun had set 13 minutes ago so these would be silhouette shots as to not over expose the moon. But we had it. Time to return to earth.

Later, when I showed the moon transit shot to my daughter, her first thought was: hey that’s from the film, E.T. the Extra-Terrestrial. So in addition to celebrating NASA’s Apollo 11 accomplishment, I guess we are in inadvertently paying homage to Steven Spielberg’s 1982 film as well. 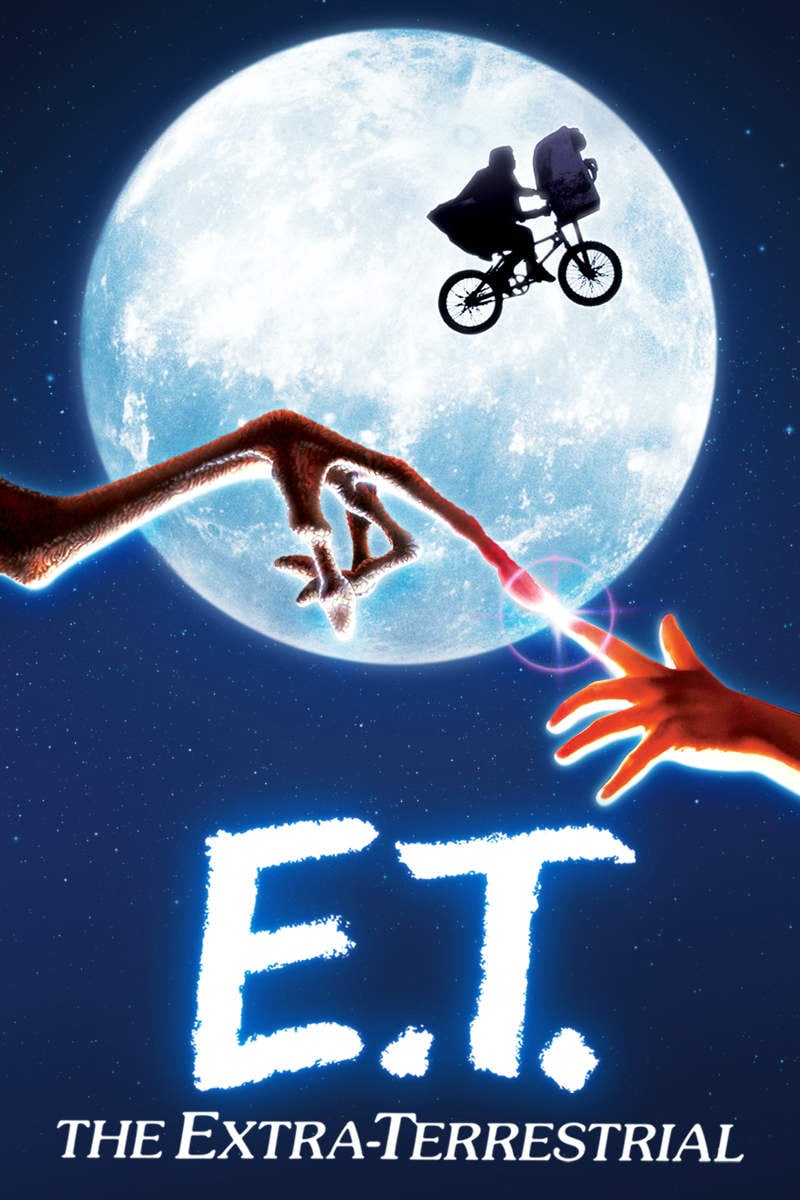 Now, I thought as Ty landed, we have 2 days until the full moon. If we could just get a shot before sunset.

Because you can’t just go to the moon once.

Update: Storms moved in. It rained. No flying for Ty and no moon visible this evening.

About the author: Christopher Sherman is a commercial and fine arts photographer who travels the world taking pictures full-time. You can find more of his work on his website, or by following him on Instagram, Twitter and Facebook.

This article was also published here, and is being republished with permission.

The Underwater Photography Guide has announced the winners of their 8th annual Ocean Art Underwater ...