This is the World’s First Terapixel Macro Photo

You can explore the photo for yourself through this interactive viewer:

This may give you a better idea of just how high-resolution this photo is: if it were to be printed at 300dpi, the print would be taller than the One World Trade Center in New York City. 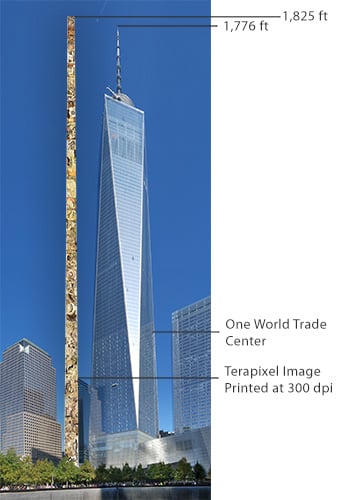 The photo’s creation was led by photographer Gene Cooper of GIGAMacro at the SIGGraph conference in Vancouver. Over 100 attendees spent 5 days putting together the food mosaic using local foods (there are also over 60 non-food items tossed in as Easter Eggs for viewers to find).

“We […] wanted to use materials that everyone is familiar with in terms of scale and size,” Cooper writes. “Food, like many other objects, when viewed at high magnification takes on an abstract form and it’s often impossible to work out what it is you are seeing.”

Since each photo had only 1mm in focus, 6 photos of each portion of the mosaic were captured and stacked to allow for a sharp area of 5mm — the extra 1mm is lost in photo overlap.

“It was a great project and although the subject matter is a little off the wall, it was a great learning experience and test to see what can be done,” Cooper tells PetaPixel. “There are as you will notice some stitching misalignments and different artifacts in the image, but we thought it was a great project to learn more about the limits of imaging and see what the roadblocks are to doing imaging at that level.

“If we do another one, we now have all of the info and process figured out from the successes and failures of the first one to do it in a much more efficient and accurate way.”

You can read a more technical explanation of how this project was done on the GIGAmacro website.

Previous DJI Unveils Version 2 of the Phantom 4 Pro: OcuSync and Quieter Flight
Next AI is Taking Low-Light Photography to the Next Level