This Volcano Eruption Was Shot from Space with a Nikon D5

The Raikoke Volcano on Russia’s Kuril Islands erupted this past weekend, sending a massive plume of ash and gas 8 miles (13km) into the sky from the 2,300-foot-wide (700m) crater. An astronaut onboard the International Space Station managed to capture a beautiful photo of the plume as the station orbited by 250 miles (402km) overhead.

“On the morning of June 22, astronauts shot a photograph of the volcanic plume rising in a narrow column and then spreading out in a part of the plume known as the umbrella region,” NASA writes. “That is the area where the density of the plume and the surrounding air equalize and the plume stops rising. The ring of clouds at the base of the column appears to be water vapor.”

Here’s an uncropped version of the above photo showing more of the surrounding area: 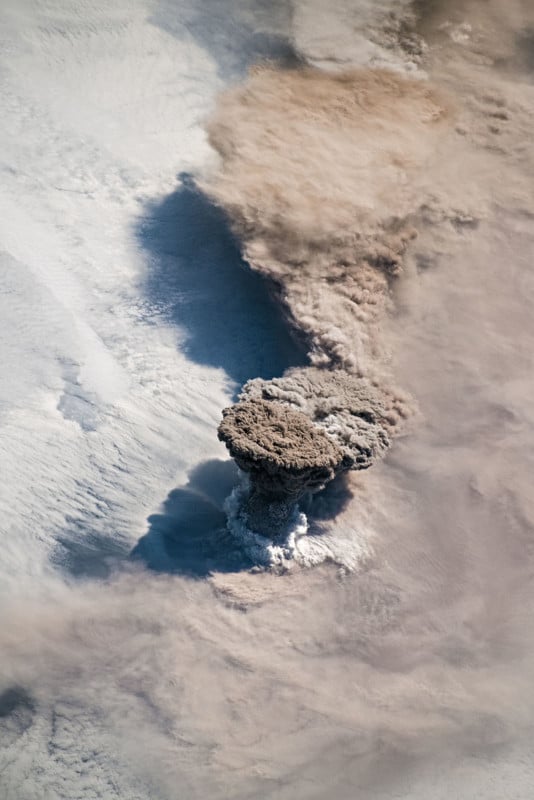 The photo was captured with a Nikon D5 at a focal length of 340mm by an unnamed member of the Expedition 59 crew. NASA ordered 53 Nikon D5 DSLRs in 2017, and 10 of the cameras arrived on the space station a few months later.

Astronauts on the ISS also managed to capture some mesmerizing views of the highly active Sarychev Volcano on the same Russian islands back in 2009. And in 2018, NASA astronaut A.J. (Drew) Feustel shot a photo of the Kilauea volcano in Hawaii erupting.