It is June 15th, 1999. The box office is being dominated by the release of the first new Star Wars in 16 years, even though it is tainted by one Jar Jar Binks. Until this day, photography was largely dominated by a technology that had existed for over a hundred years. It was a technology pioneered by George Eastman in his invention called, the Kodak. Over the many years from 1885 onward, it became known to the photographic community and to the world as “film.”

However, on a sunny day in Tokyo, the Nikon Corporation would announce a camera that would change photography as we knew it, the Nikon D1. The D1 was not the first digital camera by any means, but it was the first major adoption of digital by a camera company that the photographic community embraced. Prior to its arrival, the niche market that was digital had been dominated by none other than Kodak. Digital cameras before the D1 represented collaborations, where the chassis was made by one manufacturer (Canon or Nikon) and the sensor and LCD (if it had one) by another (usually Kodak). 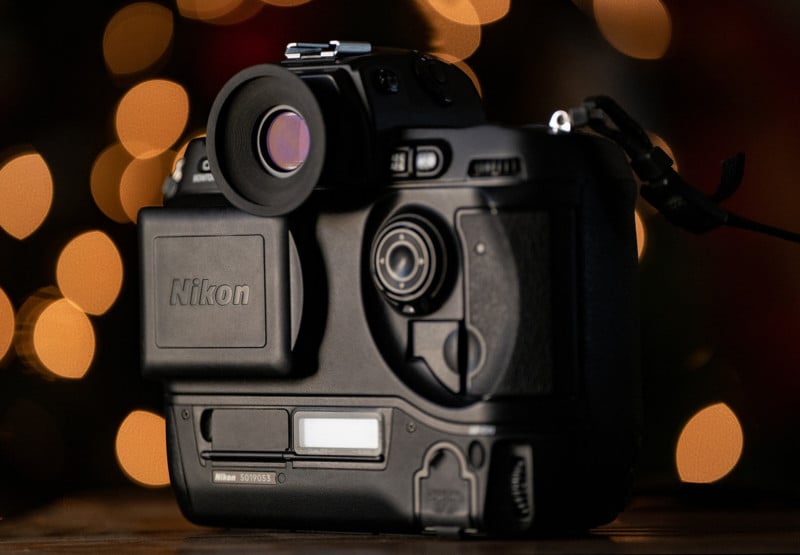 To me, the Nikon D1 was a unicorn of sorts. I had searched on and off in recent years for a new Nikon D1, only to find many “well used” copies with paint missing and buttons hanging off the body. Then in mid-2018, I saw a camera collector’s estate sale with a D1 (not H, nor X, but the original) listed in it. They sent me pictures of it and it was as though they had gone back to 1999 and photographed it.

They wanted $150 for it… I bought it immediately without any further questions. 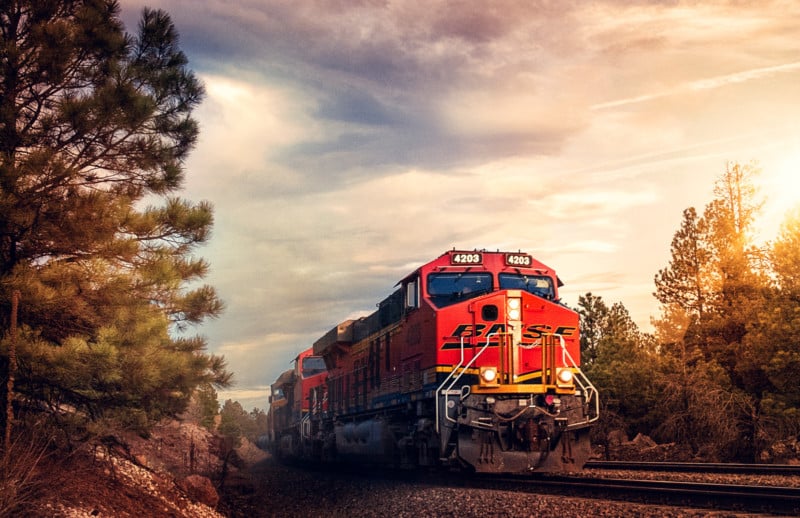 A few days later the box arrived. When I opened it up, it was almost an emotional experience. Here it was, the first Nikon digital, and it looked like it had never been touched. I might as well have been opening a window into the ’90s, for it looked brand new. So new that there was a certain part of me that wanted to put it on the shelf and find a beater to use for this piece. But that goes against everything I believe. I am a photographer; I use cameras, I do not collect them. 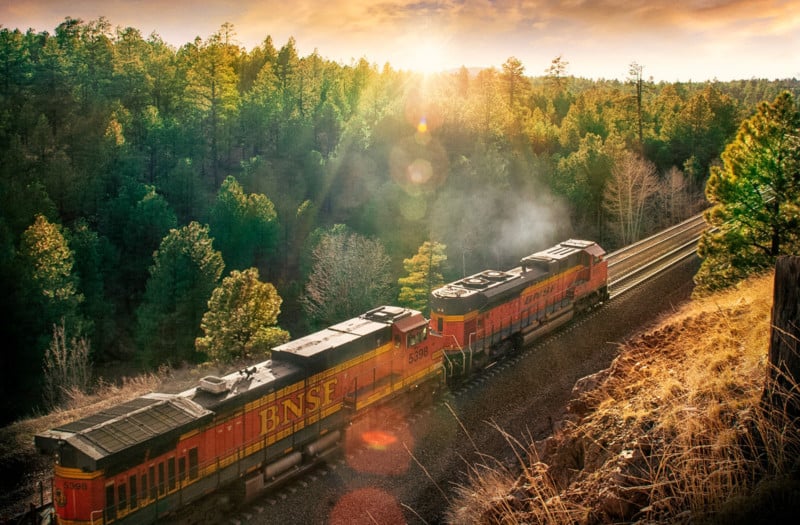 The next day, I decided I would take the camera out to see if it worked as well as it looked. I mounted my 24-70 on it and went for a walk around downtown Phoenix. I didn’t really care if there was a subject to photograph or not, just using the camera was an amazing experience. The body was a direct derivative of the iconic F5 complete with a built-in vertical grip like it should have. A funny note on this, the vertical grip only has one dial (the rear one), so if you are shooting manual, you first need to dial in your exposure… and then flip to the vertical grip. 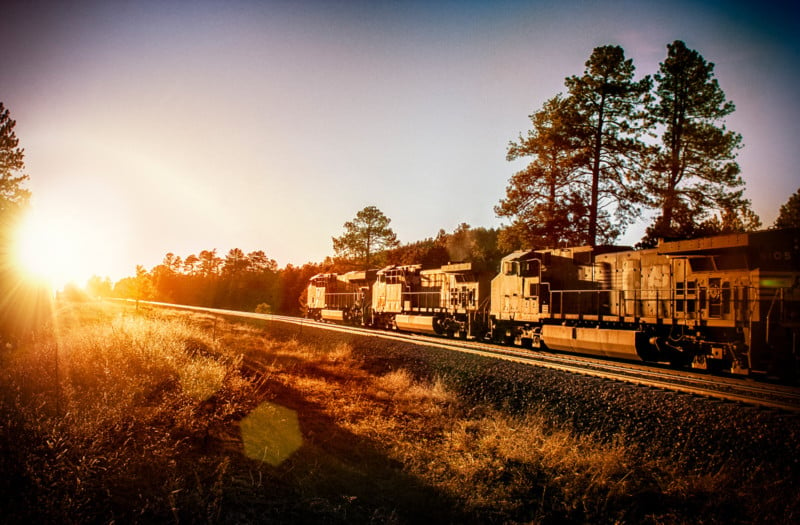 I shot for about an hour, never removing the rear LCD cap. It felt like I was using a film body again, really quite an exhilarating experience. As much as I would have loved to spend hours using the camera that day, I was limited by the fact that the battery life had diminished over the years. And by “diminished” I mean that the Ni-Cad battery in the camera would last me about 60 shots if I didn’t use the LCD, 30 or so if I did. 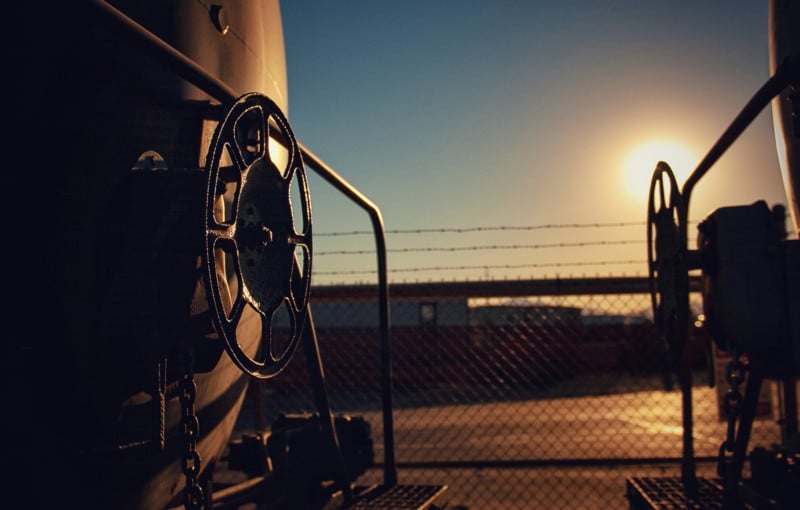 On the topic of the LCD, there is another part of the Nikon D1 that I truly love for its period representation. To start off, the D1 comes with an LCD cover that takes three people just to remove from the camera. After you pry it from the body, you are left with an LCD that has less real-estate than an Apple Watch.

After shooting a shot, you have to wait for the file to clear the buffer (designated by a green light under your thumb on the grip). Once the files are written you can then preview them on the LCD. Upon pressing the Monitor button, you see a very blurry representation of your image with an hourglass over the middle. It may be enough of an image to see if the exposure is there, but think of it as an image from an iPhone… with Vaseline smeared all over the lens.

About 15 seconds later, the hourglass goes away and your image sharpens. All things considered; it isn’t a terrible preview. However, to understand the time in which the Nikon D1 existed, you will need to look at the files on a computer. 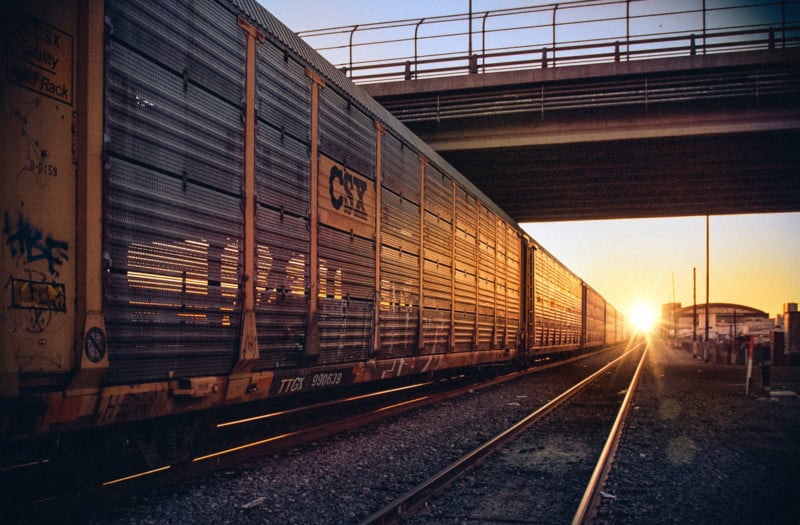 Upon getting home that evening, I dusted off the old CF card reader from my D3X case and popped in the 1GB CF card that came with the D1 as it was the only card that I had that would work (there is a 2GB limit for the camera). When I pulled up the first image, I was taken aback by the 2.7-megapixel resolution. To put it into perspective, most of your phones have screens with a higher operating resolution than the D1.

When I went to preview the images in Bridge on the Surface Studio, I thought the images were small previews, only to realize that I was looking at the full-res files. It was a bit shocking, and really enforced the idea that the composition on the shot had to be perfect in camera, for cropping was not an option. I was beginning to see the complexity that existed in using the D1 and that I would need to dedicate more time to practicing with it to have any chance of creating an image worth showing. It was at this point I decided to put the project on hold until I could commit the time that it would take to do it properly. 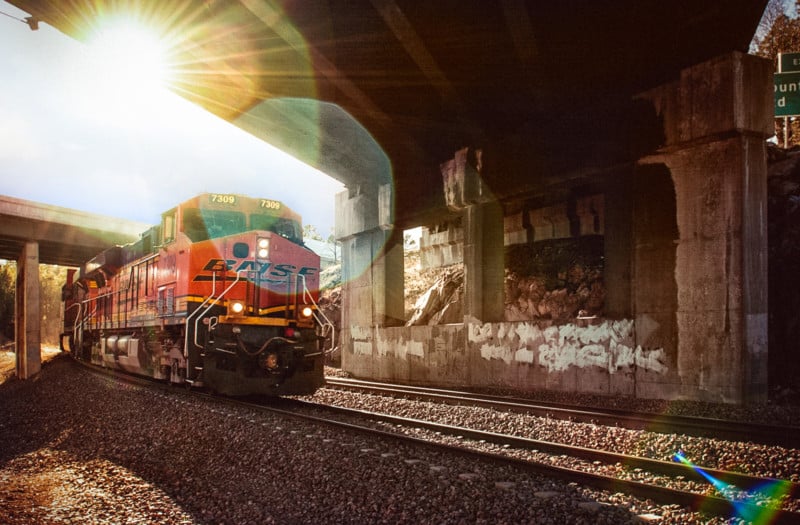 As spring approached, my schedule opened enough for me to take out the Nikon D1 for a proper evaluation, and I had a subject to photograph. As a child, my family and I used to spend our summers in a small farming town in southern Illinois. There wasn’t much to do there, other than walk the train tracks for hours each day.

My brother and I used to lay pennies on the rails with the hopes that a slow freight train would come by and smash them flat so that we could add them to our collection. It was a time in life that I hold quite fond and it is the origin of my love for trains. 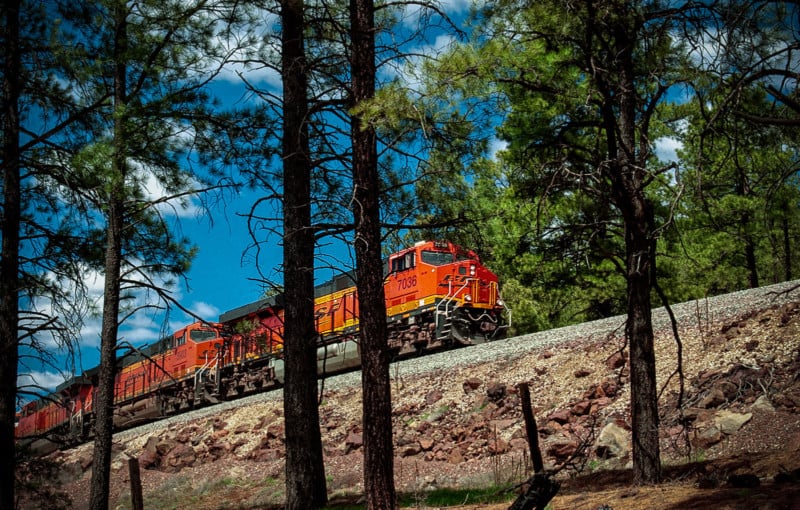 It is for this reason that when I was planning the story about the Nikon D1, trains were immediately at the top of my subject list. Not only was there a distinct nostalgia of the camera that started us (photographers) down the digital road, but there was a sentiment of the simplicity of my youth. This story was just as much a photoshoot as it was therapy for my love of photography. With the trains near my house, I would drive to the tracks a couple of times a week and photograph them with hopes of finding out how to extract the most from the camera. This would not be an easy task… 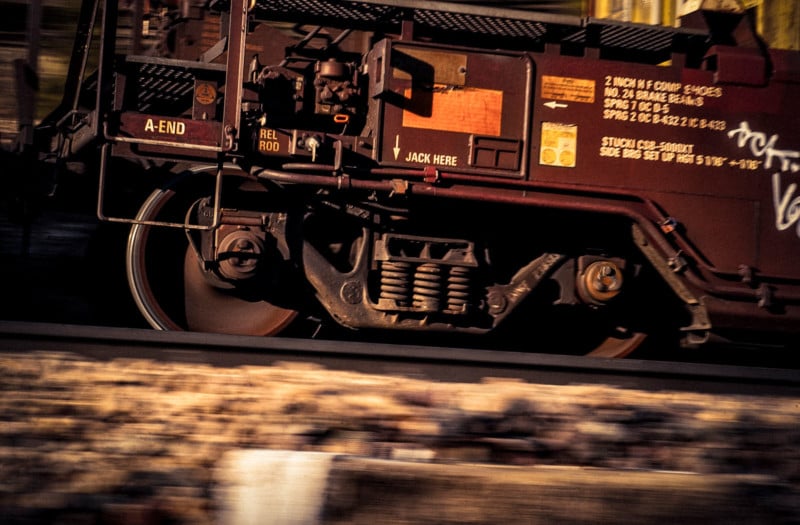 For starters, in single shot mode, the Nikon D1 can only shoot 1 frame every 10 seconds! Now, imagine you are photographing a freight train rushing by and you get one, yes ONE, photograph of the engine before it passes. You can imagine how many shots I missed and the time I waited just to get the first keeper.

About a week in, I found that I could shoot the D1 in Continuous mode and grab more than one frame per train. However, I usually shut the camera off between trains to save the battery, but in doing so, I lost all the shots that had not cleared the buffer, for the camera does not have a safe shut-off mode. This was getting complex… 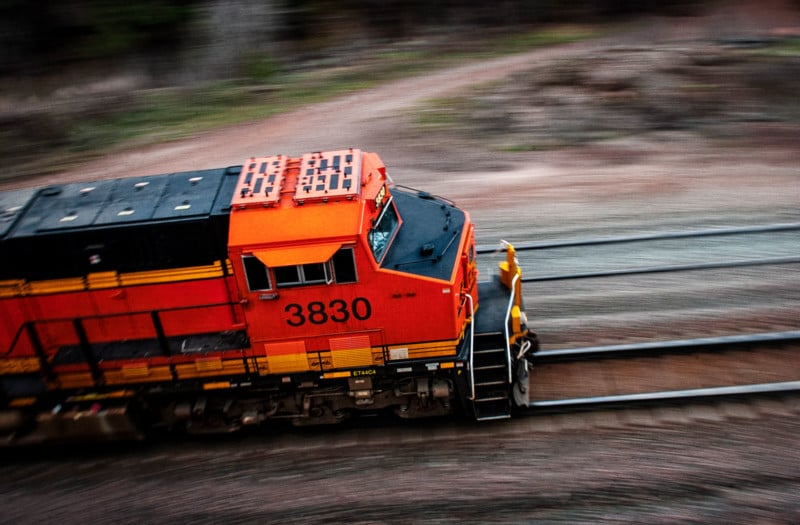 Unfortunately, getting the proper exposure out of the D1 would prove to be just as challenging. New cameras have 12-15 effective stops of dynamic range, meaning that a missed exposure can usually be pulled back in post without too much integrity loss in the shadows or highlights. On the D1 you get about 2 stops, noticeably less than if you were shooting slide film. So, creating a proper exposure on the Nikon D1 is less a practice in skill and more a sadistic joke played on the person pressing the shutter button. 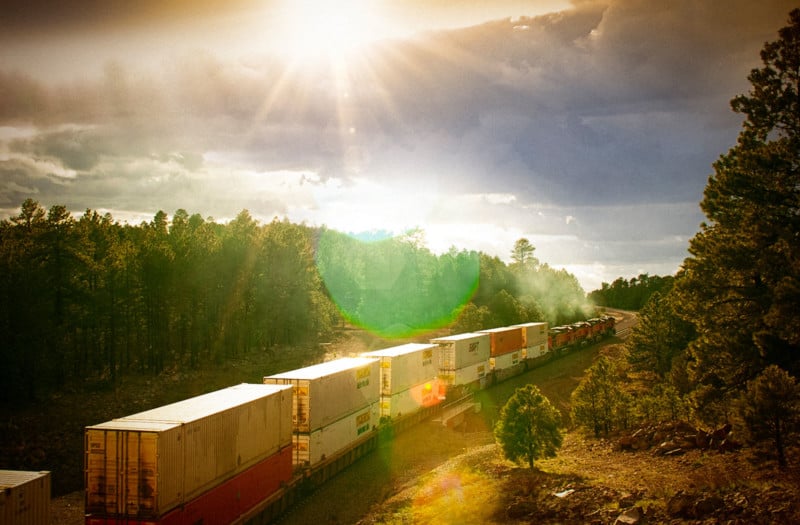 This brings us to the ultimate question that is this article, “what is it like to shoot the Nikon D1?”

It is one of the hardest cameras I have ever used, and its capabilities are extremely limited, but for some reason, I can’t help but love every second of using the D1. In some sense, it is a photographic meditation where the images being created are less important than the practice of creating them. It is extremely difficult to settle into creating pieces with the D1, but so rewarding when a solid shot is made.

It is the equivalent to an athlete practicing their sport while wearing a weighted vest. Every motion and reaction is delayed and sluggish, but the muscles and neurons become stronger and quicker in the process. Shooting with the Nikon D1 has made me better on set, even in the short time I have had the luck to use it.

Then there is the part that I can’t ignore. Every time I take out the Nikon D1, it reminds me of how far we have come in the last 20 years. I sadly have taken for granted so many aspects of photography that I never even realized until I used the D1. Often when I am out in the middle of the forest with it, taking pictures of trains, I think about those that created art and informed the world with the D1.

I think about a photographer in Miami, armed with the Nikon D1 and a Tokina lens, showing up to the house to photograph an immigrant boy named Elian Gonzalez. The photographer’s name was Alan Diaz, and on that sunny April day he didn’t think about all the difficulties that were presented by the D1, he simply created. The image he shot with the camera was lower resolution than most of your monitors, but it does what every photographer sets out to do, tells a story. On April 22, 2000, Mr. Diaz created the very first digital image to win the Pulitzer Prize.

Never forget the greats that laid the foundation upon which we stand.

About the author: Blair Bunting is an advertising photographer based out of Los Angeles, California. The opinions expressed in this article are solely those of the author. You can see more of his work on his website, blog, Facebook, and Instagram. This article was also published here.