This past weekend, just off the coast of Cornwall, UK, underwater cinematographer Dan Abbott and wildlife biologist Lizzie Daly captured what is being called the most viral wildlife story of the year: incredible footage of a rare human-sized jelly fish swimming alongside Daly in the murky deep.

The footage was captured on the last day of Daly’s Wild Oceans Week—an initiative meant to inspire viewers and raise money for the Marine Conservation Society in the UK—and it shows a massive barrel jellyfish that is rarely captured on camera. Typically humans only encounter them washed up on shore, so when one “appeared out of the murky water,” it took both divers by surprise. In fact, when we spoke to Abbott over the phone earlier today, he told us the dive almost didn’t happen.

“We were supposed to do a blue shark dive that day, but it got cancelled because of the weather,” he told us. “This was our plan B. Actually it was our plan C.”

What followed was something Abbott described to us as, “a beautiful 25 minute encounter with an absolutely stunning creature.” Adding, “I didn’t even know jellyfish got that big!”

The footage and stills seen here were captured by Abbott using his Panasonic GH5 inside a Nauticam housing, with only natural light, and shooting at 100fps “so you could really appreciate its finer movements, the gracefulness.” Because they were only 7 meters deep on a sunny day, and the jellyfish was moving so slowly, Abbott tells us the shooting was quite easy.

“Getting shots was much easier than a lot of marine animals because you can position yourself much easier, move more smoothly, and ensure you’re not getting in the animal’s way,” says Abbott. “We both work with wildlife in many contexts, so we obviously understand how important it is that we not disturb the wildlife.”

You can see Abbott shooting alongside the jellyfish in the BTS images below: 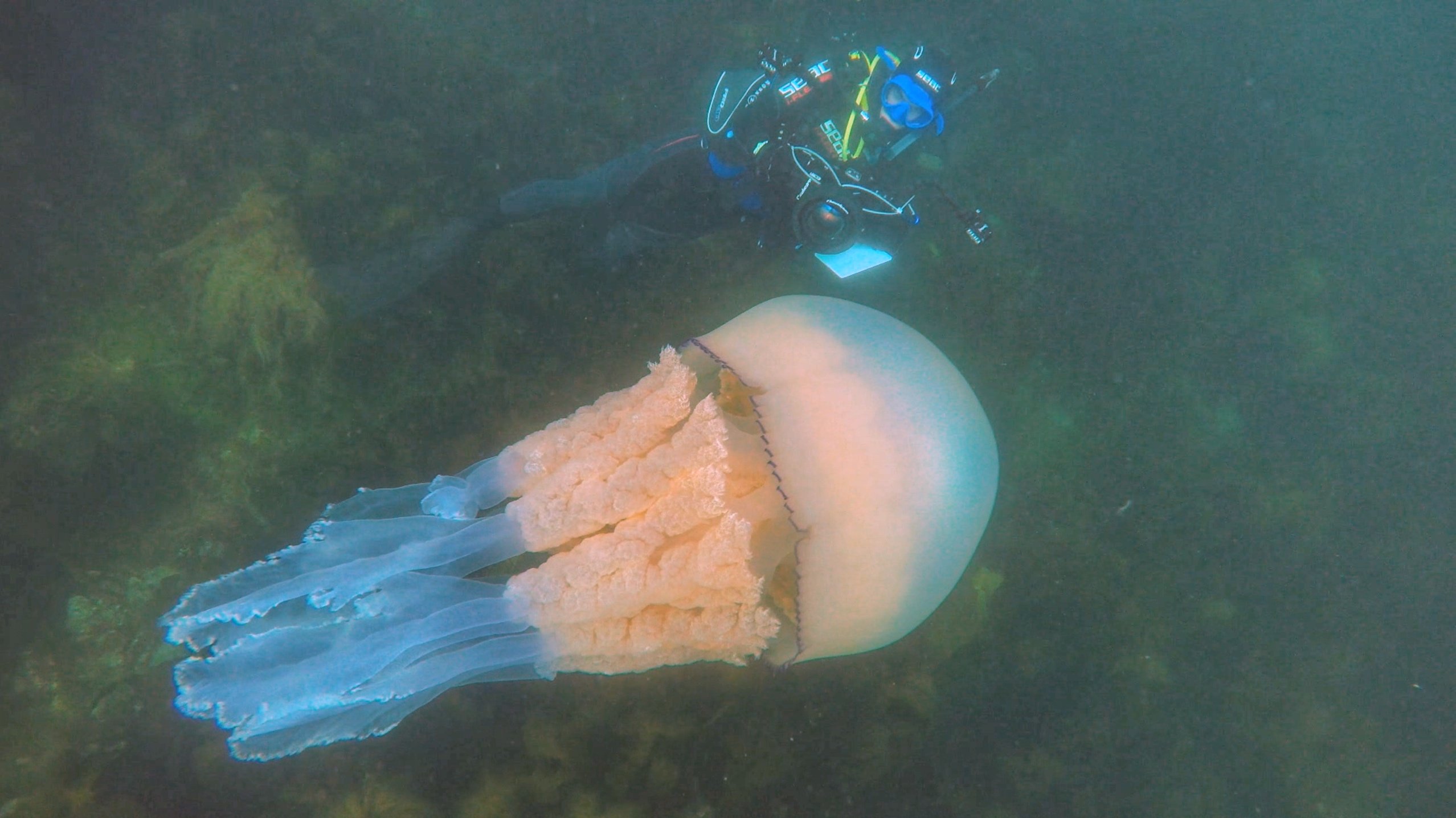 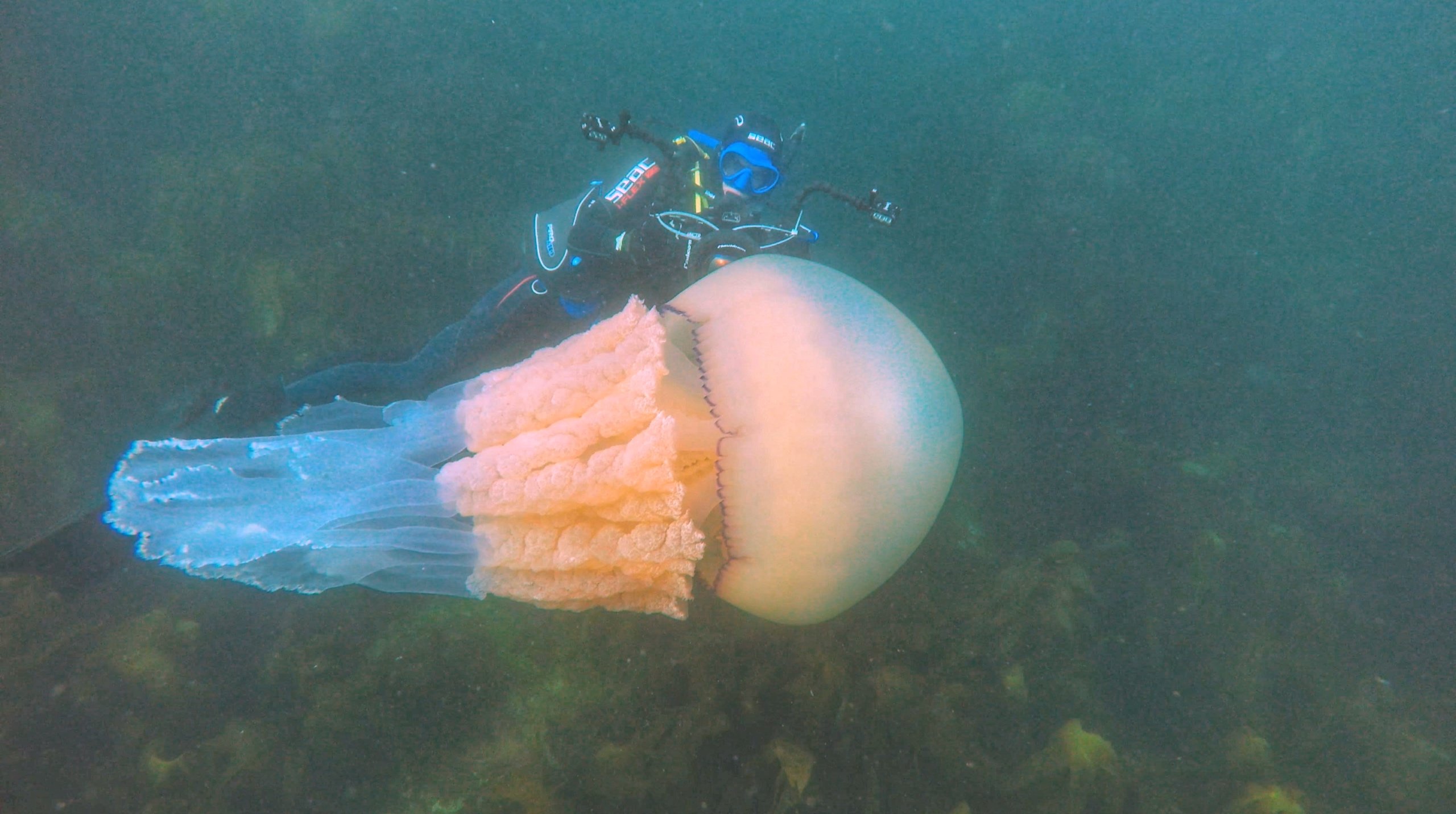 The main challenge, says Abbott, was capturing the actual size of the thing.

“My aim in those 25 minutes was to try and portray on video what I was experiencing in the water. To fill the frame and make it look as big as it felt being next to it,” Abbott tells PetaPixel. “Getting Lizzie alongside it was very deliberate. We wanted that human story to be very strong, and she gives you a sense of scale well.”

“Because it’s not going very fast, you can predict what sort of direction it’s going in,” he continued. “You can get ahead of it, underneath it—I was able to get a shot of it blocking out the sun to portray its size—and just capture it doing what it does. The way it moves is very beautiful.”

You can see a sense of that in these GoPro clips of Abbott that Daly captured during the dive:

On the phone, Abbott’s excitement around the imagery he captured and the impact it’s having was obvious and infectious. “I’m just completely overwhelmed by how this has done,” he told me. “For me and for Lizzie as well, we are just so grateful and humbled that the world is talking about UK wildlife. The world is talking about jellyfish! That’s crazy.”

As I typed furiously, trying to keep up with the details he was sharing, he spoke passionately about how privileged he felt to have had this experience and been able to share it with the world.

“For both me and Lizzie it is all about the wildlife,” he continued. “I became an underwater cinematographer because I love underwater wildlife. To be able to capture that and share it with the world has been one of the most special experiences of our lives. The feeling of coming up from that dive… we both just screamed.”

Credits: All photos and video provided by Dan Abbott and used with permission.

Previous The DJI Ronin-SC is a Smaller, Cheaper 3-Axis Gimbal for Mirrorless Cameras
Next Amazon Accidentally Sold $13,000+ Camera Gear for $100 on Prime Day